I found The Forty Days of Musa Dagh – which I had never before read in any form -- amazing in a number of ways. I devoured the dense, nearly 900 page novel in just a few days, unable to put it down. I read the newly-published translation of Franz Werfel’s 1933 masterpiece, which includes about 25% more narrative than the previous English version. 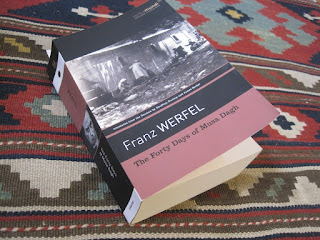 I should write a long review, including some research into Werfel himself, but right now I only want to cover a few generalities about the wonderful quality of the book.

First, I admired Werfel’s research into the 1915 massacre of Armenians by the Turks. I think the history of these events was already being suppressed by the late 1920s when Werfel began writing. His description of the ragged, starving, perishing Armenian masses of men, women, and children from the village of Zeitun was vivid. His descriptions of the Turkish authorities and their rationale for the genocide (not yet given a name) were overwhelming.

The day-by-day description of the people of seven Armenian villages near the Syrian coast who hid in the woods on the mountain Musa Dagh and resisted the deportation to nowhere being inflicted by the Turks is powerfully drawn. Each episode is based on true stories, particularly the survival of a few thousand villagers on Musa Dagh and their rescue by French troop ships.

Werfel maintained a remarkable balance between descriptions of collective suffering and of individual agony, so that the reader’s consciousness is drawn in both directions. He occasionally mentions acts of mercy by non-Armenians, but clearly shows that the moral bankruptcy of the Turkish leaders (quite a few directly taken from history) corrupted the common people, who are mostly depicted as looting and then resettling the villages whose inhabitants have been forced out. Also corrupted: the military, civil, and police authorities who directly deprived the Armenians of life and property.

On the political side, I kept thinking: how could Werfel write a Holocaust analogy before the Holocaust began? But I know the tragic answer: he was trying to warn of the terrible future that somehow he saw so clearly. Although he clearly admires the German Pastor Johannes Lepsius, another of the historical characters depicted in the book, he had no illusions about the meaning of the events to the mainstream German observers. While Lepsius begs everyone who will listen to act to save the Armenians, almost no one will listen to him; what aid he musters is too little too late. My very sad reaction to Werfel’s attempted warning was that the main learners who took a lesson from the massacre of the Armenians were the Nazis, not the humanitarians and not any future victims.

On the novelistic side, I was also impressed by the author’s choice of central characters, the French-educated Gabriel Bagradian. While the history is powerful, I thin Werfel keeps the reader’s attention through the depiction of Bagradian, his family, his determination to save his fellow Armenians, and his close relationships. Bagradian’s conflicts between his self-interest and his loyalty to his people, his developing identity from identification with France and Europe to embracing of an Armenian identity, his developing leadership in military and political affairs, and his tragic ending create a perfect story against which Werfel presents the historical themes.
Posted by Mae Travels at 3:57 PM

The biography of Franz Werfel by Peter Stephan Jungk is now available as an eBook Franz Werfel: A Life in Prague, Vienna, and Hollywood