Arabian Sands by Wilfred Thesiger is widely recognized as a classic of travel literature. Thesiger, born in 1910, spent the late 1940s traveling in the "Empty Quarter" of Arabia with Bedu tribesmen. (He objects to the more common name Bedouin for grammatical reasons.) He spoke Arabic, wore native clothing, rode a camel for days and days across wide stretches of desert, suffered hunger and thirst, hid from authorities who hated infidels, hunted Oryx and other desert animals, and generally enjoyed every minute of his escape from civilization.

"All my life I had hated machines," he wrote. "I did not go to the Arabian desert to collect plants nor to make a map; such things were incidental. ... I went there to find peace in the hardship of desert travel and the company of desert peoples." He committed himself to travel the hard way, without any modern conveniences or conveyances: "Perhaps this was one reason why I resented modern inventions; they made the road too easy." (p. 278)

I enjoyed the details the author presents about the Bedu's powers of observation that allowed them to cross empty desert and find the rare watering places for the camels while avoiding hostile tribes. He describes the uncomfortable posture that one assumes to ride a camel, the way that the meager food is prepared, the occasional rain that created discomfort but which they had no way to capture for drink, the varieties of discomfort from cold, sand, wind, scorpion stings, and more. He told how his companions' view that any guest must be given food repeatedly made him fear as his scanty supplies of flour and coffee were offered to strangers. The variety of each chapter is always a surprise.

I suspect that I am wise to know nothing else about Thesiger than the facts presented in this book. I suspect that an Englishman who loved Arabs so much would be on the opposite side of many political situations from me. Evidence: a map of the Middle East (p. 40) where every country is named except Israel, whose boundaries are recognizable but whose existence is unrecognized. I can make a guess what this means. Thesiger stayed away from global politics. He mentioned the Israel independence war only once, in a rather neutral way, stating that his Bedu had never heard of the Jews at all. So I prefer to seek no further than this supposed neutrality.

The author's overall impression in the final pages of the book: "I shall always remember how often I was humbled by those illiterate hersmen who possessed, in so much grater measure than I, genrosity and courage, endurance, patience, and lighthearted gallantry." (p. 329)

In other words, we have the work of a romantic Orientalist of a type that can no longer sustain reasonable people's credulity. The development of the clash of civilizations, Christian and Islamic, reflected already in the widespread hatred of infidels Thesiger encountered, has changed ones ability to buy this approach. As he wrote, oil drilling and exploration were already certain to change everything for his Bedu companions. It's interesting to see the last gasp of this romantic voyaging.

Posted by Mae Travels at 7:40 PM No comments: Links to this post

Another Hike with International Neighbors

This week we hiked at County Farm Park, near the recreation building where I do my exercise class. About a dozen women participated. The weather and the fall leaves were very beautiful. 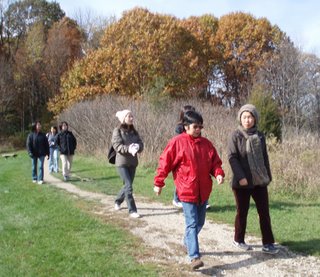 I talked to several of the other hikers, and I learned something really interesting from Katie. We were talking about making blogs, and she explained how one enters Japanese characters into a computer -- or a blog. She says one types the phonetic word into the computer (in the Hiragana alphabet). The computer returns the equivalent character (or a choice of possible equivalent character) in the pictorial system. The typist selects the desired character, thus creating a correct version of his or her text. I find this really fascinating. 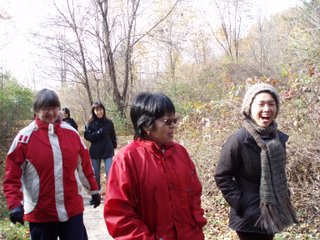 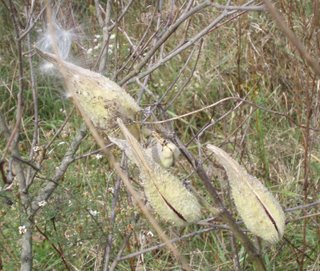 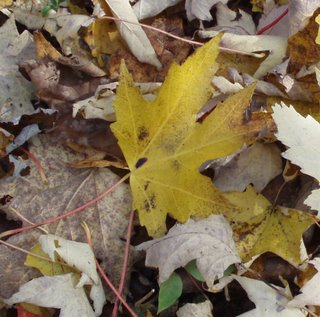 Note and update: A friend asked about Japanese writing that I mentioned above. Here's a website with a description: Origin of writing in Japan
Posted by Mae Travels at 3:02 PM No comments: Links to this post 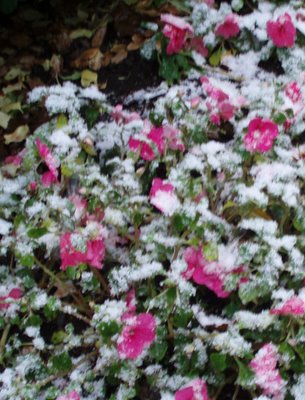 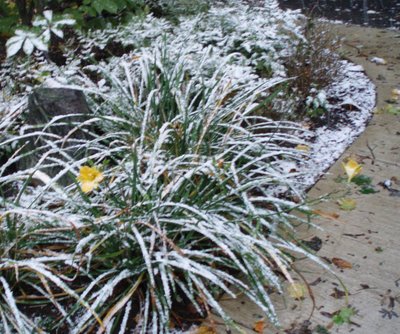 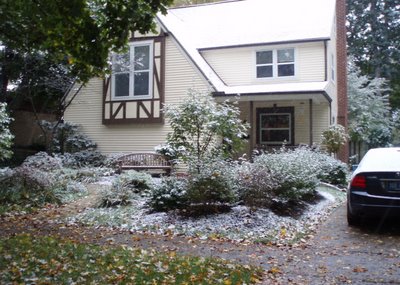 Update. As often happens, we came up lucky compared to Buffalo. The snow in the picture was essentially 100% of our snow. After that: rain and a few snow showers, but no accumulation. This morning's NYT (October 13) reported:

Posted by Mae Travels at 12:27 PM No comments: Links to this post

A Week in Fairfax 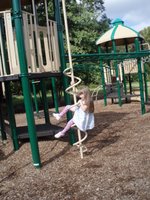 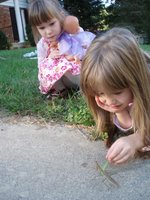 When I wasn't watching Miriam and Alice, I also spent an afternoon at the National Gallery of Art, especially enjoying the special exhibit “Henri Rousseau: Jungles in Paris." High point of the exhibit: a stuffed lion attacking an antelope, posed as seen by a taxidermist in Paris years before Rousseau studied jungle creatures in the Natural History museum at the Jardin des Plantes.

On the wall: the magnificent Rousseau painting of the same scene, with the two animals set in a huge jungle of greenhouse plants. For more on this see Henri Rousseau: Jungles in Paris - The Hungry Lion...

Images from the press (like L'Illustration and Le Petit Journal), postcards, and other source material for Rousseau's eccentric visions also accompanied an amazing assembly of paintings from museums throughout the world as well as in private collections.
Posted by Mae Travels at 4:39 PM No comments: Links to this post 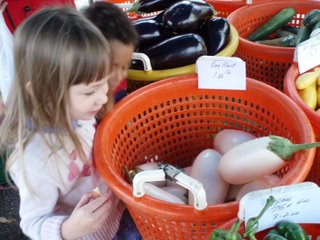 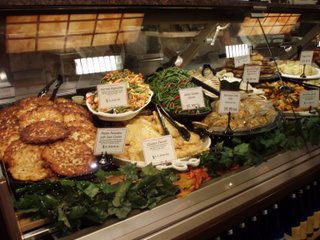 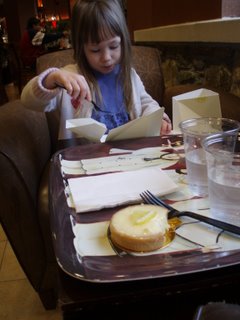 Posted by Mae Travels at 2:43 PM No comments: Links to this post