Posted by Mae Travels at 1:11 PM No comments: Links to this post

According to the Times Online, some presumably attention-seeking Italian "scientists" have asked for the body of Leonardo da Vinci to be exhumed in order to prove that the Mona Lisa is a self-portrait. No sensible person would go along with this stunt, though as with much about Mona Lisa, the less-cool heads may prevail. However, I've seen a number of references to this nutty project.

All kinds of factual information makes the proposal look dumb. The article itself mentions that no-one knows if it's really the body of Leonardo da Vinci because "The church in which Leonardo was buried was destroyed after the French revolution of 1789. The remains were reburied in the castle’s smaller chapel of Saint-Hubert in 1874, beneath an inscription that describes them as 'presumed' to be the master’s." The stunt men also want to test the body to see if it's really Leonardo, claiming to know of "descendants," but there aren't any of those: Leonardo was very famous for being gay.

The reason why they think the Mona Lisa is a self-portrait is that they claim they know what Leonardo looked like (the famous "self-portrait" of an old man), and they claim they don't know who she was. Here are a few facts:
There are a lot of very gullible people when it comes to Mona Lisa. The article's conclusion is insightful:

Nicholas Turner, a former curator of drawings at the Getty Museum, said: “It sounds a bit fanciful, slightly mad, as if the Leonardo bug has taken hold too firmly in the minds of these people. We know that Mona Lisa was a specific person, she existed and it’s her portrait. If Leonardo heard about all this, he’d have a good chuckle.”

For more debunking, see this neuroscientist's view of why Mona Lisa's smile is so mysterious: What is it with Mona Lisa's Smile?
Posted by Mae Travels at 3:11 PM 1 comment: Links to this post

In the Guardian's Book Blog today: a review of a poem, published in 1892, about Mona Lisa:

Poem of the week: La Gioconda by Michael Field

In the article is a biographical sketch of the authors -- two women who wrote collaboratively under the name Michael Field. I find this interesting. The interpretation of the poem seems overwrought -- but most interpretations of poems seem that way to me. Here is their overview of the poem and the book it came from:

"La Gioconda" is from their second published collection Sight and Song (1892). All the poems are about pictures, the stated purpose of the authors being "to translate into verse what the lines and colours of certain chosen pictures sing in themselves; to express not so much what these pictures are to the poet, but rather what poetry they objectively incarnate". The use of "song" and "sing" is suggestive of a synaesthetic approach, and there are poems in the volume whose lineation seems to attempt rhythmic reflections of visual effects. "La Gioconda" is not one of these: like its subject, it is focused and formal. It might almost have been a sonnet.

See what I mean?
Posted by Mae Travels at 5:24 PM No comments: Links to this post

"Avedon Fashion Photographs 1944-2000" was the wonderful exhibit we saw today at the Detroit Institute of Arts. Lucky us! It was the last day. We arrived before noon, and there was no line -- but as we were leaving, the line went all the way through the roped-in waiting area and out of sight. 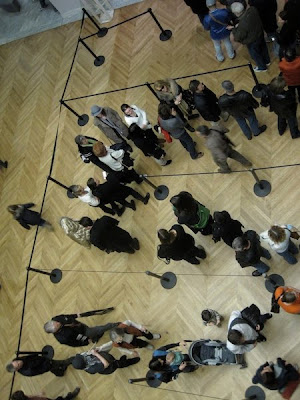 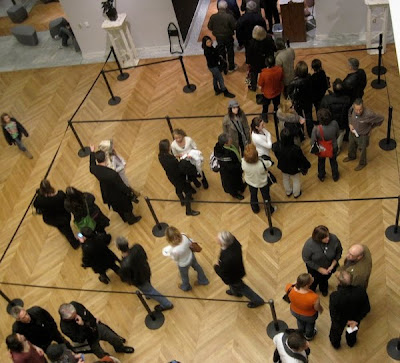 No photography was allowed inside the exhibit, but I've found a few of my favorites from the show. The choice of photographs was extensive and remarkable. Avedon's photographic techniques were fascinating. Almost all were black and white photos. In many of them, he seemed to like the black and the white, avoiding shades of gray as much as possible. A model wearing a black dress (or apparently black) would be shown on a set of steps washed out to almost white. A model in a white dress would be photographed among a group of people in tuxedos and indistinct black dresses. One of the most famous: a model in a black and white dress leaning on a circus elephant.

Avedon was incredibly creative in using a model as an actress so that a fashion photograph would also tell a story. The elephant photo is definitely one of these, as is a photo of a very high-style model sitting next to an afghan hound that seems to take on her facial expression. 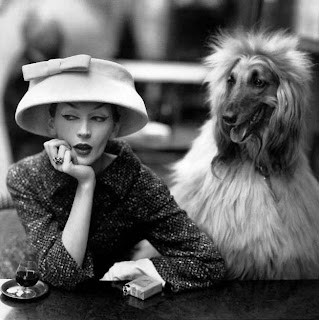 Lighting played a huge role in the way he created these remarkable images. One memorable one showed a woman in a hat with a sort of burst of net, lit from both the side and from behind so that she was outlined and light came through the net. Even in the studio portraits with plain gray backgrounds, he used lighting with great skill and imagination.

Although these fashion photos undoubtedly do their job in emphasizing the gowns, coats, hats, or hairstyles, the photographic techniques make them works of art independent of this goal. 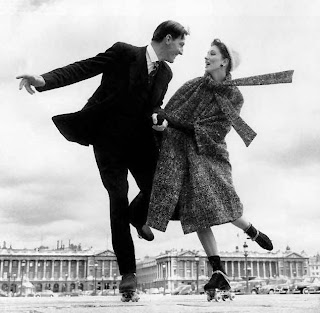 Not to mention the way he used Paris backgrounds and glamorous locations to create his distinctive atmosphere.
Posted by Mae Travels at 5:00 PM 2 comments: Links to this post 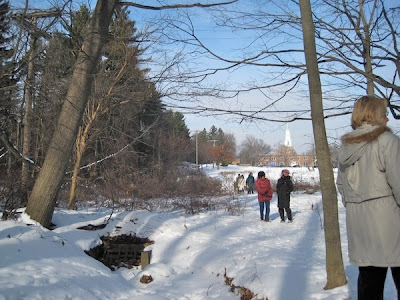 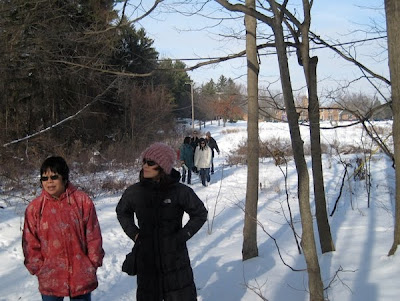 Posted by Mae Travels at 7:25 PM No comments: Links to this post

Some so-called researcher in Italy just announced that he has "diagnosed" the illnesses of a large number of subjects of famous paintings. The pathetically credulous news media take this without any grains of salt at all, and announce the claim as if it's a real discovery -- especially featuring what he says about Mona Lisa. Like Linus with Lucy's football, they constantly fall for anyone who claims a new insight about Mona Lisa.

The BBC article about this (dare I call it a hoax?) linked to a number of similar stories about Mona Lisa. To show you what I mean about credibility, here are some of the headlines with dates:
To continue about the latest claim of medical insight: another, more sensational newspaper listed all the paintings "diagnosed" by this attention-seeking charlatan. (Only a charlatan would claim to diagnose diseases from a picture without other evidence. Would you let someone diagnose your illness from just a photo? Without even asking your symptoms? I don't think so.) 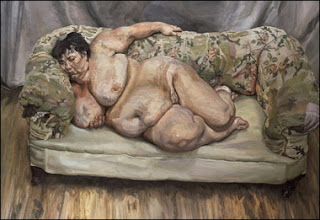 Here's the claim made about one painting, by Lucien Freud (right):

DUBBED "Big Sue", this 1995 painting by British artist Freud fetched an incredible $33million at auction.
DOCTOR'S NOTES: "There are many examples of obesity in art and the subject in this would be classified as obese."

How did this genius ever figure out that the woman in this painting is obese? Because she's called "Big Sue"? Because that's what it's famous for? How could they fall for such a shallow announcement? Most of his other claims are equally unimpressive, though he sometimes mentions more obscure conditions than obesity.
Posted by Mae Travels at 1:12 PM 3 comments: Links to this post

Jasper Johns at the National Gallery 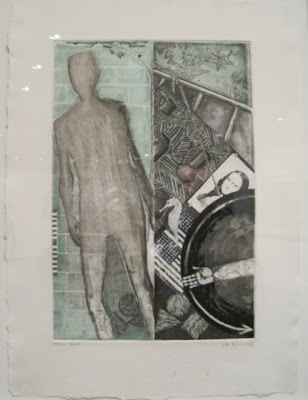 A few days ago, we rushed through a Jasper Johns exhibit at the National Gallery in Washington. "The Seasons (Summer)" is one of many works to allude to great masterpieces in his way. I took a quick photo of this one, dated 1987, since it included a Mona Lisa. 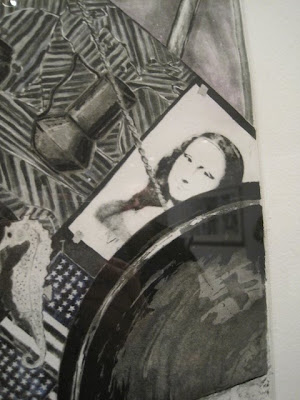 Posted by Mae Travels at 5:13 PM No comments: Links to this post 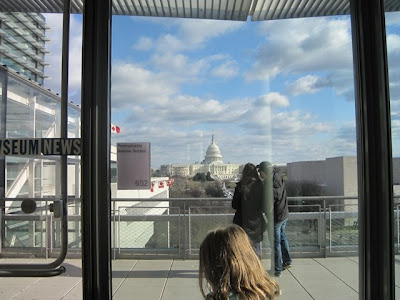 The Newseum is a fairly new museum near the Capitol and the Mall in Washington where the Smithsonian and National Gallery are located. It's expensive (especially since the other museums are all free). I think the museum suffers from an identity problem. There are so many aspects of journalism, the press, and newspapers that seem to be missing. Example: there's virtually nothing about feature writing unless you count the name of the restaurant: "The Food Section." There are some aspects of investigative journalism, especially some history in the "4-D" film. What IS there, however, is compelling and worth seeing.

Clearly the sponsors of this very expensive museum want to preserve some memory of journalism as it was and is about to not be any more. A vast selection of old front pages with the biggest headlines of the last 100 years or so invite one to take a really long time to contemplate what the front page was like. Fascinating -- but I would have liked more background about the papers themselves and the writers. A display of all the photos to have won a Pulitzer prize was startling in how disturbing they were. Wars, natural disasters, and accidents are frequent themes. We had to leave because the children were reacting. Interesting.

TV journalism is well represented, with a number of studios where visitors standing against a blank screen can make "newscasts" or "weather reports." That's fun. Nearby are video screens with a game of being a journalist for kids, and other things I did not explore.

A special exhibit commemorated the 40th anniversary of Woodstock, stressing that journalists took the photos on display. A large section of the Berlin Wall, along with a full watchtower and a history of the Wall occupy a big section of the basement and the twisted remnant of the World Trade Center's control tower is also on display. Other than having been the subjects of news, their relationship to journalism isn't clarified, but the objects are well presented. Again, it's worthwhile, just somewhat unfocused.

The building is extremely impressive, as shown in the photos below. A huge glass elevator goes from the lower level (Berlin Wall in the background) up to the top where there's a fabulous panorama of the city. 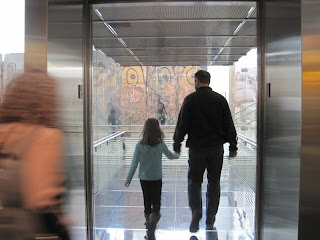 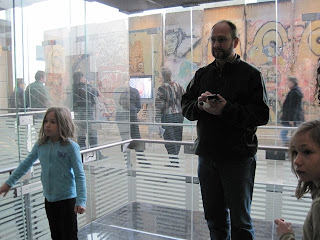 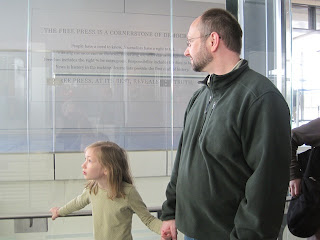 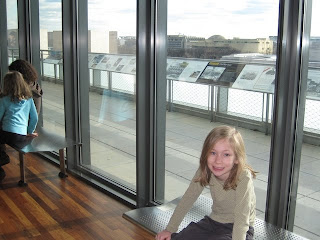 Posted by Mae Travels at 4:09 PM No comments: Links to this post 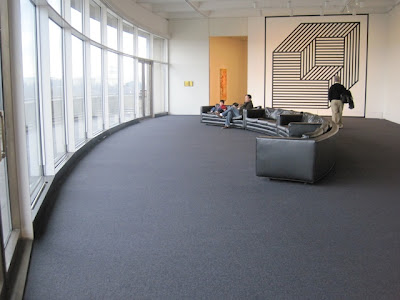 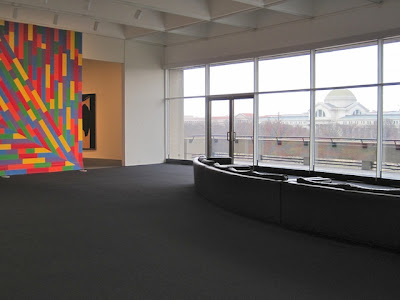 The Hirschorn Museum is a beautiful building with a fascinating collection of sculpture. From some of the lobbies you can see across the Mall to the history and natural history museums. Some of my favorites --- 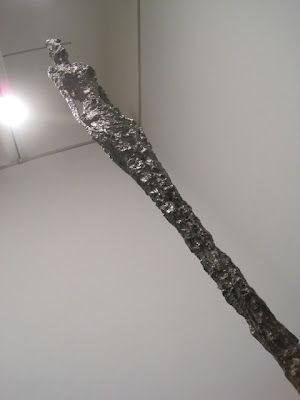 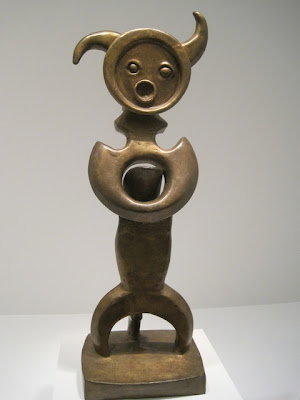 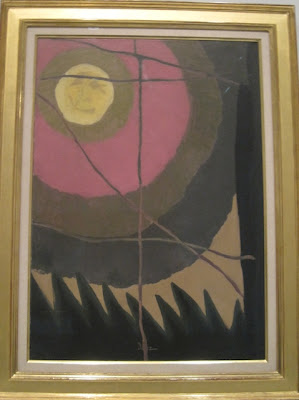 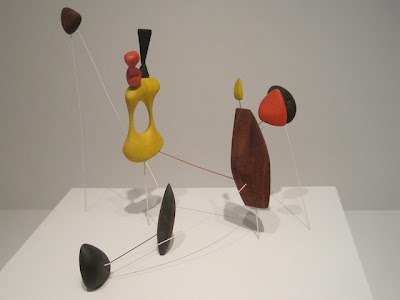 Calder -- I touched one of his mobiles and it moved 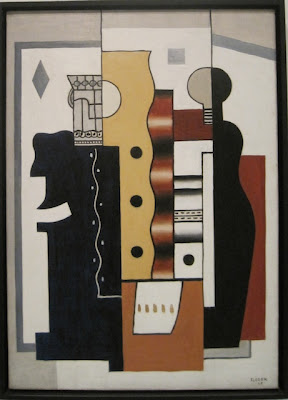 "Still Life: King of Diamonds" by Leger
I don't remember ever seeing this one. 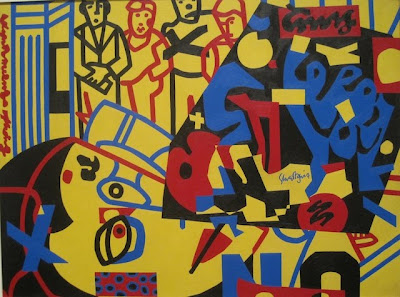 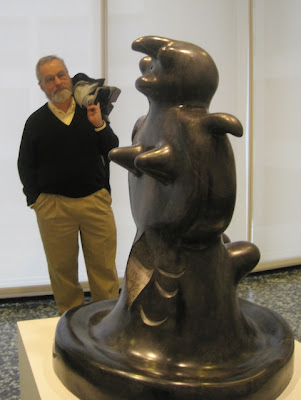 Len with a Miro

Conceptual: Joseph Kosuth's work IS its name:
"Four colors four words"
Posted by Mae Travels at 4:22 PM No comments: Links to this post