Culture! Last night I watched Downton Abbey season 3, part 1 & 2, and also finished the last few pages of J.K. Rowling’s The Casual Vacancy. I’ll start with Rowling. As a long-time Harry Potter fan, having read the books and seen the movies more than once each, I felt at home with Rowling’s style – but I constantly felt that this was a book about muggles. (Surely you know that “muggles” are what the wizards in Harry Potter call non-magical people).

Rowling hates muggles. She sets the scene with the death of a muggle man – a much-beloved citizen and civic leader in the town of Pagford: which I can’t help thinking is an extension of Harry Potter’s awful muggle family on Privet Drive. In the muggle world of Pagford, death is painful, distasteful, and messy. Funerals are boring and uncomfortable. A magical curse administered with a wave of an evil wand is so very preferable – the victim drops, his spirit hovers for a moment, and his body is unchanged and unmoving at least until the end of the description. So dignified. Despite grief and despair, wizards have a sense of purpose which keeps them going as they mourn. Not all the bereaved in Pagford are so lucky.

What mainly motivates good wizards in the Harry Potter books is a desire to propagate the arts of wizardry and defend their world from pure evil in the persona of purely evil Voldmort and in his followers. Bad wizards are simply motivated by this pure evil with maybe a little resentment and hatred left from their childhood. What mainly movates people in Pagford is spite, resentment of authority (or love of being in authority), a sense of class distinctions, anger at how life had treated them, or some combination. Every character has at least a few of these basically banal motives, which drive most of the plot. Despite the concentration on social interactions, I don’t find that The Casual Vacancy works well as a comedy of manners like Jane Austen’s or the kind of book Margaret Atwood or Doris Lessing wrote before they turned to distopian fantasies.

Teenagers quickly become the focus of The Casual Vacancy after the first scene. Their lives are miserable and their bodies are their enemies. There’s nobody like Hagrid to come take them away to any alternate world like the Hogwarts School of Witchcraft and Wizardry. They hate or resent their lives and families, torment and bully one another, and know in their hearts that they will never escape growing up to be just like their parents – or can’t imagine ever being grown up. Writing about teenagers  is definitely Rowling’s strength, and it really comes out in The Casual Vacancy. She skillfully portrays their concerns with how to grow up and become real people or authentic, as Fats, one of the principal characters of the book, puts it.

Along with teenage misery, The Casual Vacancy is a study in contrast between the lives of insiders (pure white British people with a strong work ethic though maybe a lot of hangups) versus the lives of outsiders (Asian doctors; drug-addicted petty criminals and welfare dependents). The only person who ever went from outsider to insider is the man who died at the very beginning of the story, and no one can duplicate his idealism about the future of this society's victims or his pleasure in trying to improve society. The rest of the characters’ pleasures often seem to come from hurting someone else. The only magic they find is hacking into someone’s Facebook page or the town council’s online message board.

Some of the insiders, like teachers or social workers, try to help the less fortunate, but being well-meaning in this story is kind of boring. The Asian doctors treat both the upper and the lower classes, which I guess is because socialized medicine in Britain is a leveler – something I hadn’t thought about much, but found interesting. But the strongest connections between insiders and outsiders arise through hatred, contempt, mean-spiritedness, and efforts by the insiders to increase the misery and marginal nature of the outsiders’ lives. The main plot revolves around the desire of the insiders to cut off government support for a drug-addiction-treatment clinic and to stop poor children from attending Pagford’s good middle-class schools. That’s really mean.

People writing about Harry Potter books have complained because there are no gay characters except Dumbledore, whom Rowling revealed to be gay long after the books were published. (Dumbledore showed no signs of it in anything written down.) Well, in The Casual Vacancy, there’s a gay character who is likeable and has a sense of humor, which distinguishes her from almost all the other characters. But she’s only in one short chapter of the 500+ page book – and the rest of the references to gay people are taunts and cruel name-calling from sadistic fathers and vicious school bullies.

This sole gay character’s remarks provide one of the few humorous moments in the book, as she is able to make rather pointed and insightful quips about her family. But she hates Pagford and quickly gets in her beautiful car and returns to her much more satisfactory life with her partner and her high-paying job. The remainder of the book us unfortunately quite short on humor, as far as I noticed. I hope I’m wrong; I wish someone would tell me what I missed.

In Downton Abbey season 3, the creepy Crawley family are still trying to save their beloved castle, their aristocratic way of life, and their servants’ jobs and downstairs status for future generations. Not much I can say about it except it’s a great escape! All that wealth! All those servants (despite their squabbling)! All those evening gowns! In comparison, in The Casual Vacancy, the muggles who populate the town of Pagford want to save the town from drug addicts and low life welfare cases. Their motives are much uglier than the Crawley’s. They don't even give good parties. Other than that parallel, the two don’t have much in common. 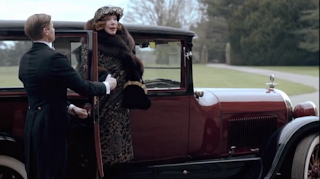 Incidentally: in Downton Abbey I thought Shirley MacLaine was great; a perfect opposite to Maggie Smith. I wish that Mrs. Levinson, her character, hadn’t really gone back to America for the rest of the season, but I know she did. And I hope that in some future novel, J.K. Rowling will go back to imagining an alternate world where unhappy but properly gifted teenagers can find a better life than in the world of their muggle families. Even the world of Downton Abbey has some kind of magic in it, despite taking tons of [American] money to make the magic work.
Posted by Mae Travels at 2:43 PM 1 comment: Links to this post