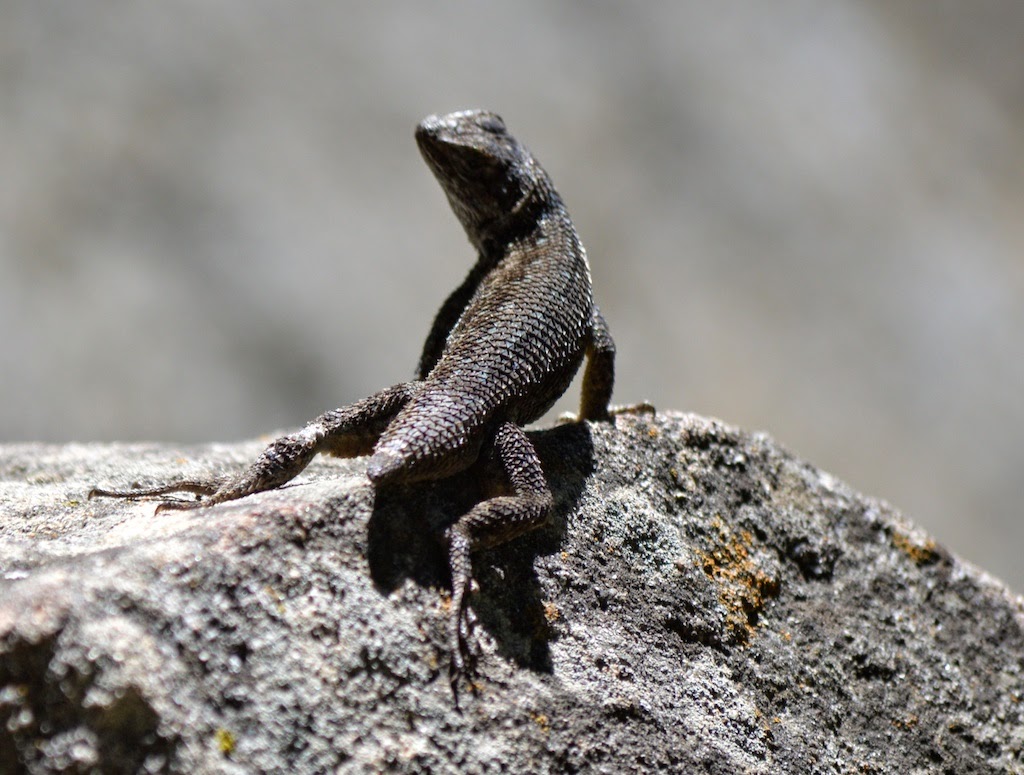 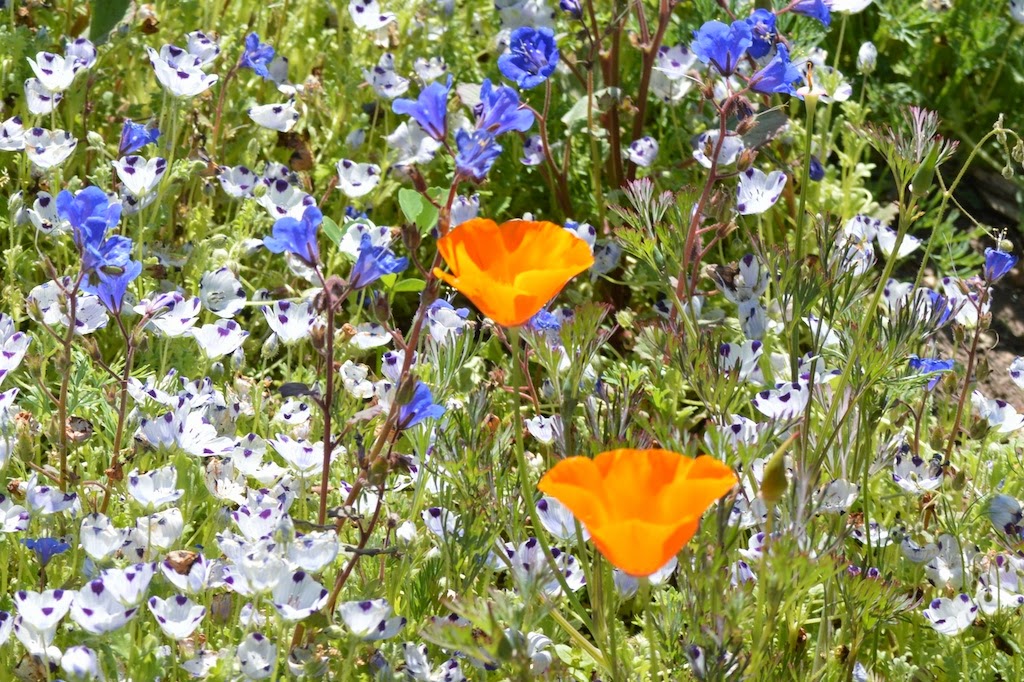 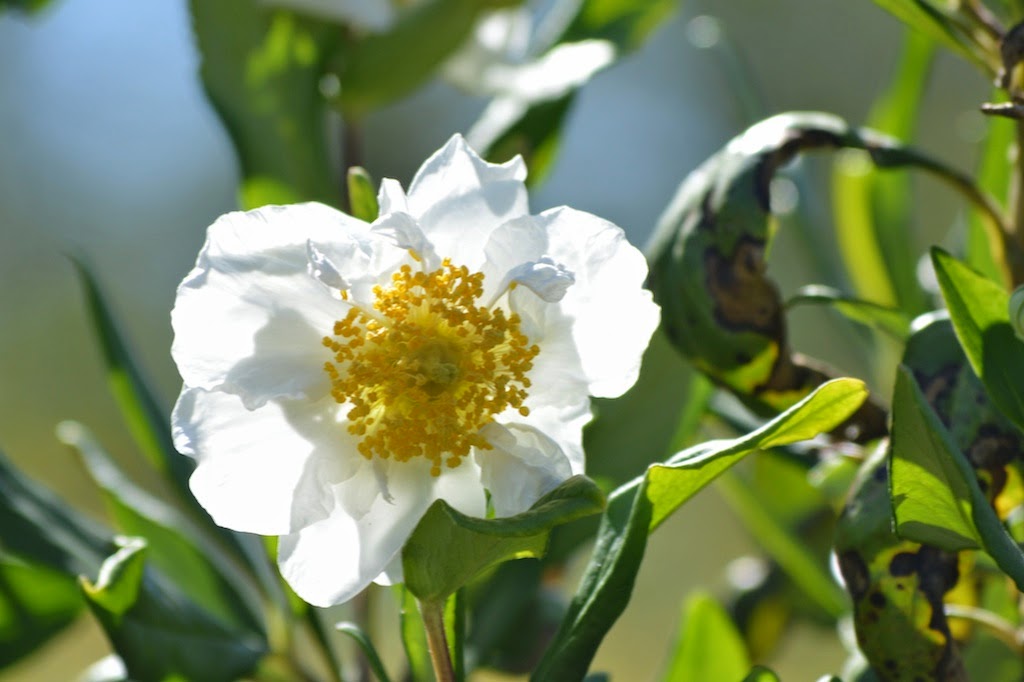 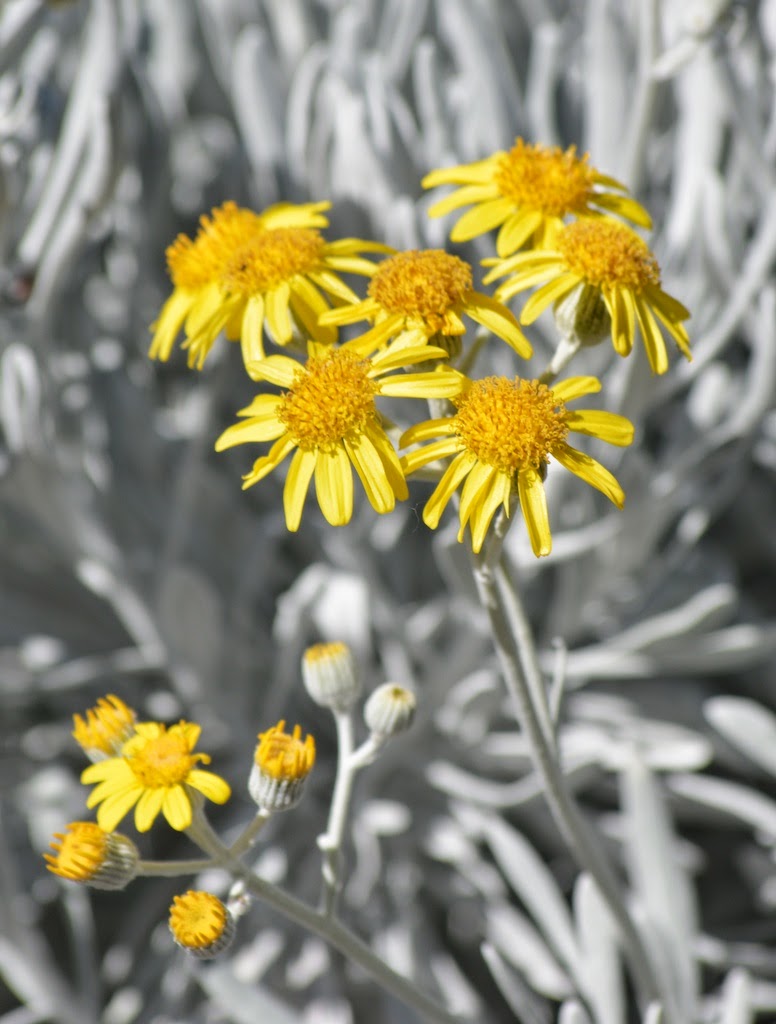 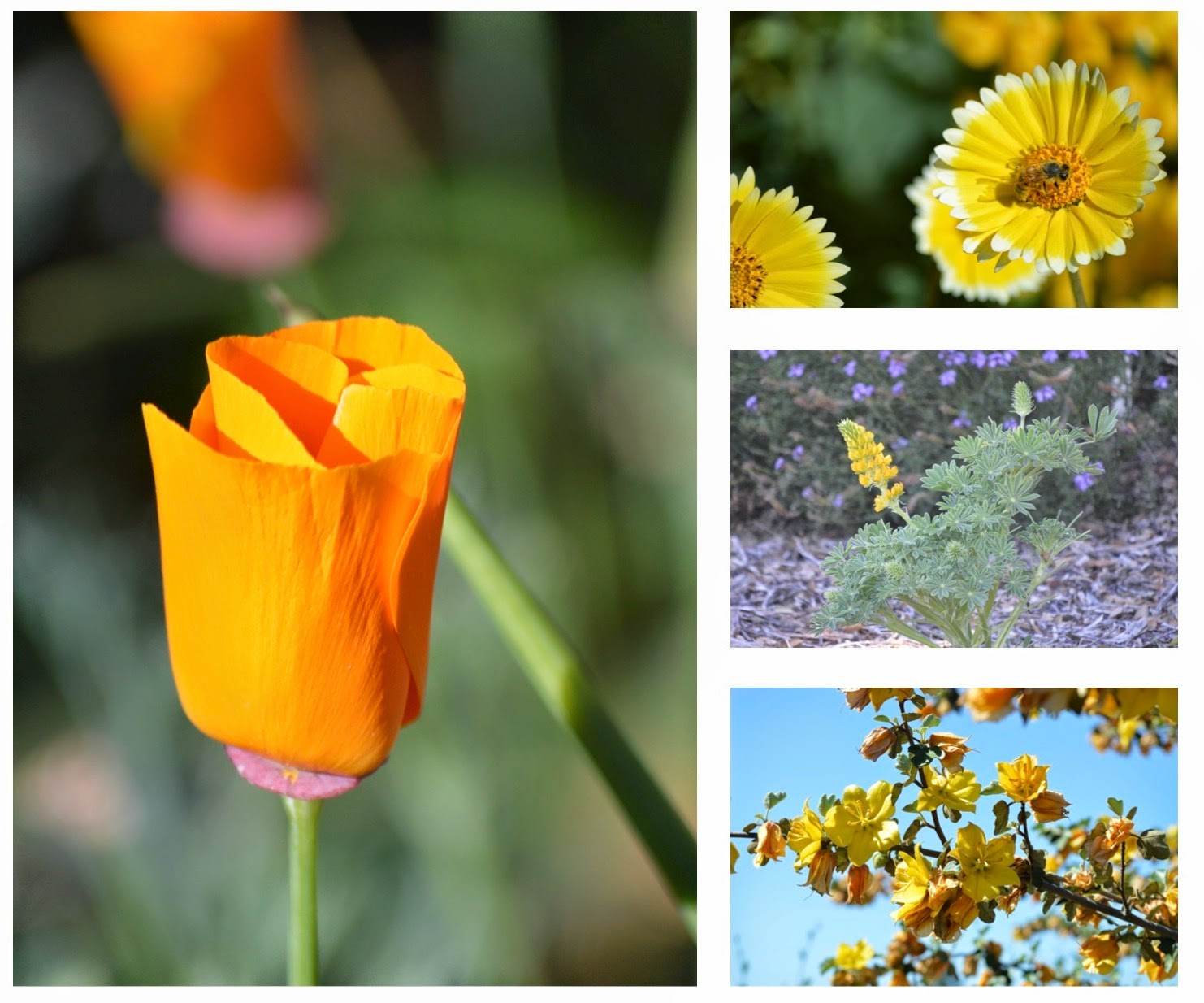 The poppies, lupines, bluebells, and many other flowers seemed to be at their peak yesterday, despite the drought. We enjoyed searching for birds and strolling along the many trails.
Posted by Mae Travels at 10:25 AM 1 comment: Links to this post 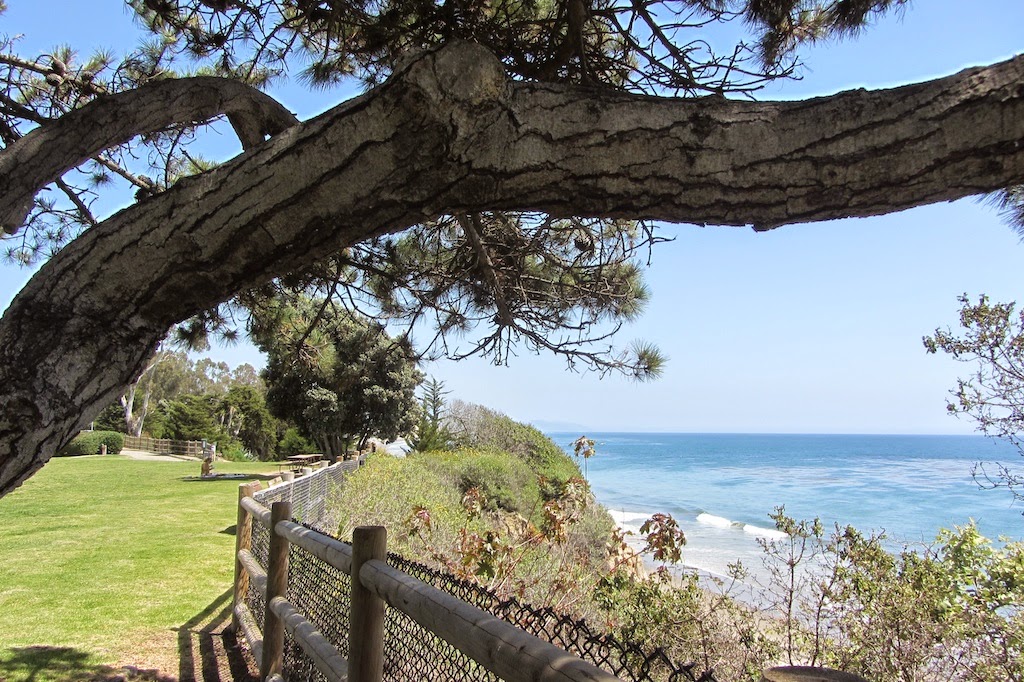 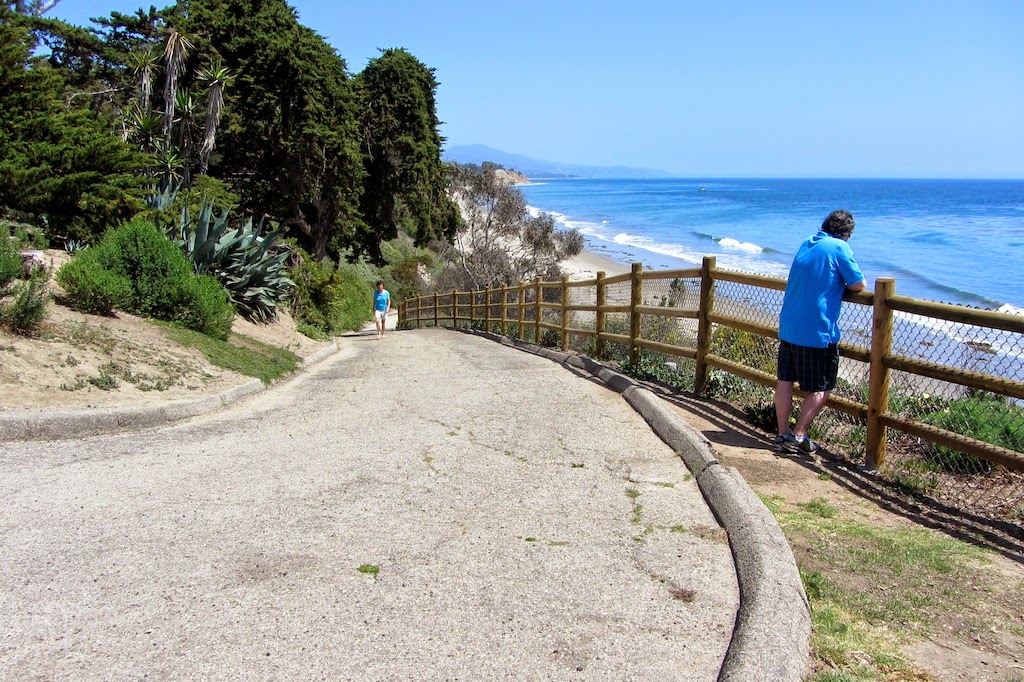 Summerland, California: an intriguing name, isn't it? All of California is a summer land. Imagine walking down the hill from the cliffs, then walking on the sandy beaches with waves bringing in sparkling foam and rafts of kelp. These are pictures of Lookout Park in Summerland near Santa Barbara. I could see it from the train on Monday, and explored the beach a bit yesterday. 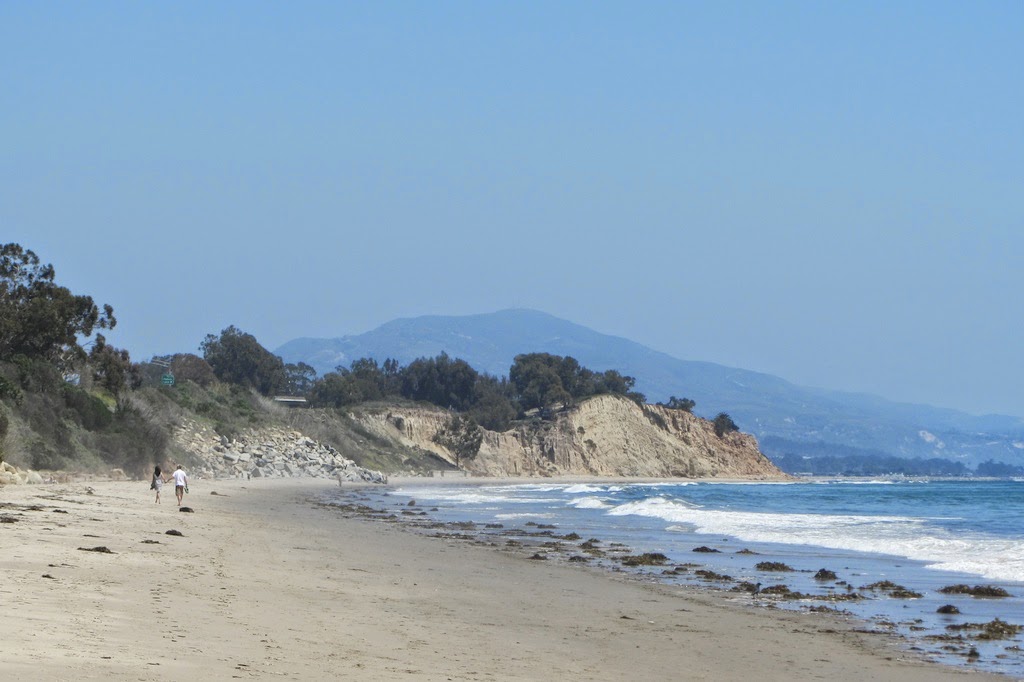 In the park, I found this marker: 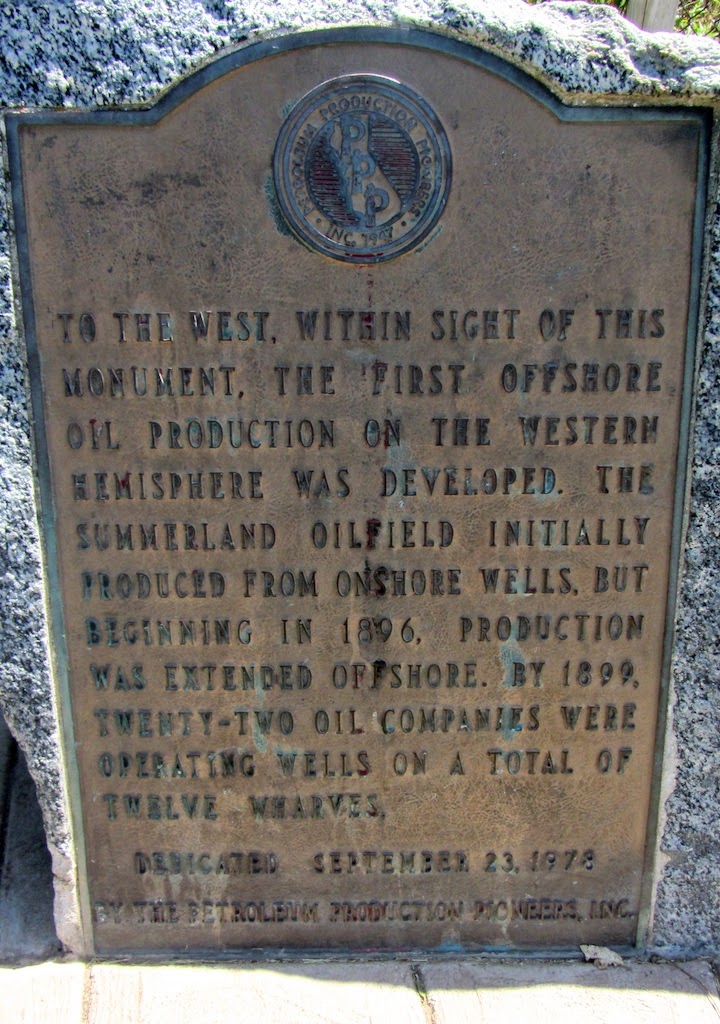 The underwater oilfields near Santa Barbara are a counterpart to the idyllic scenery and the combination of wealth and laid-back hippie lifestyles. Summerland's original founders were spiritualists in the 19th century tradition, but their idealism was trounced by oil drilling both onshore and offshore within a few years of their arrival. The current community of around 1500 people has antique shops and beautiful houses on one side of the freeway/railroad line, beach parks and incredible beach-front mansions on the cliffs on the other side, and oil wells on the horizon.

The conflict between oil and natural beauty is noticeable all along the coast. In the early 20th century oil wells stood quite close to the area of luxury homes in Santa Barbara where we are renting an apartment now, mainly replaced by offshore drilling. The 1969 record-breaking oil spill on a platform near the Santa Barbara harbor killed much wildlife. This catastrophe inspired much anti-drilling sentiment and law. And now at the farmers' market every week, some people wear anti-fracking tee shirts and some solicit signatures on anti-fracking petitions -- the latest threat to the beautiful environment.

Blobs of tar appear on all the beaches; the oil companies claim they are a natural result of all the offshore oil, while environmentalists think they are the result of the oil wells. If you are future-oriented you carry baby oil and rags or other materials for removing tar from your feet after beach walks.

One thought: oil enables the huge car culture throughout California and the US. No doubt: there's a constant conflict here and everywhere. Just not always so iconic.
Posted by Mae Travels at 3:21 PM No comments: Links to this post 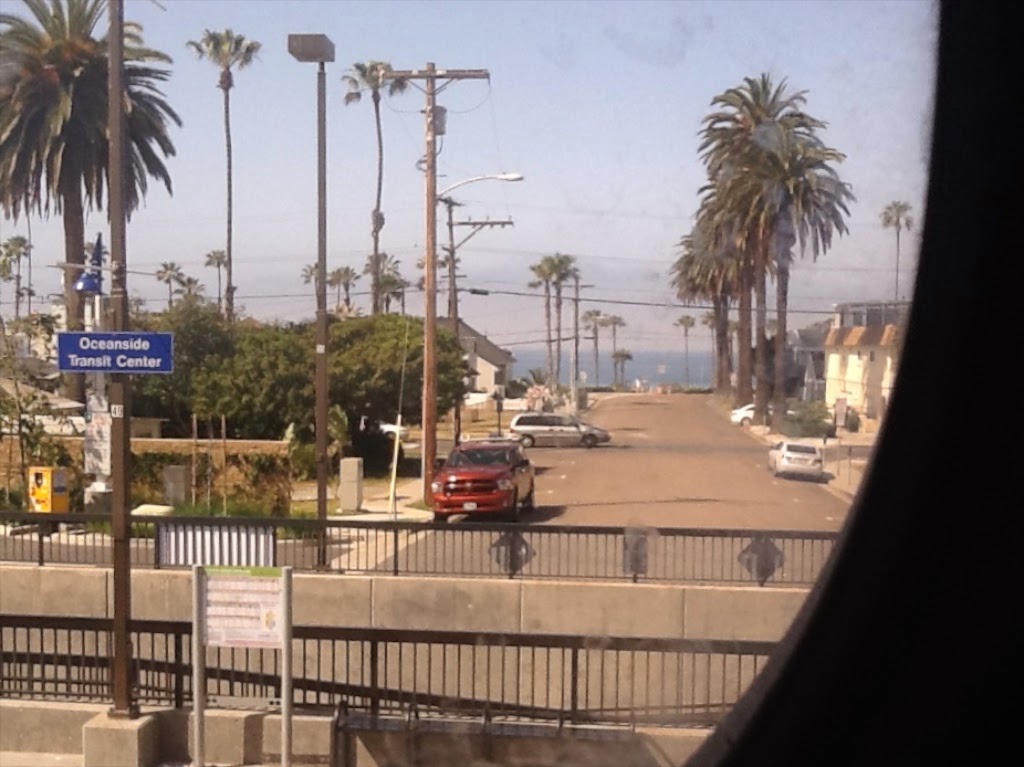 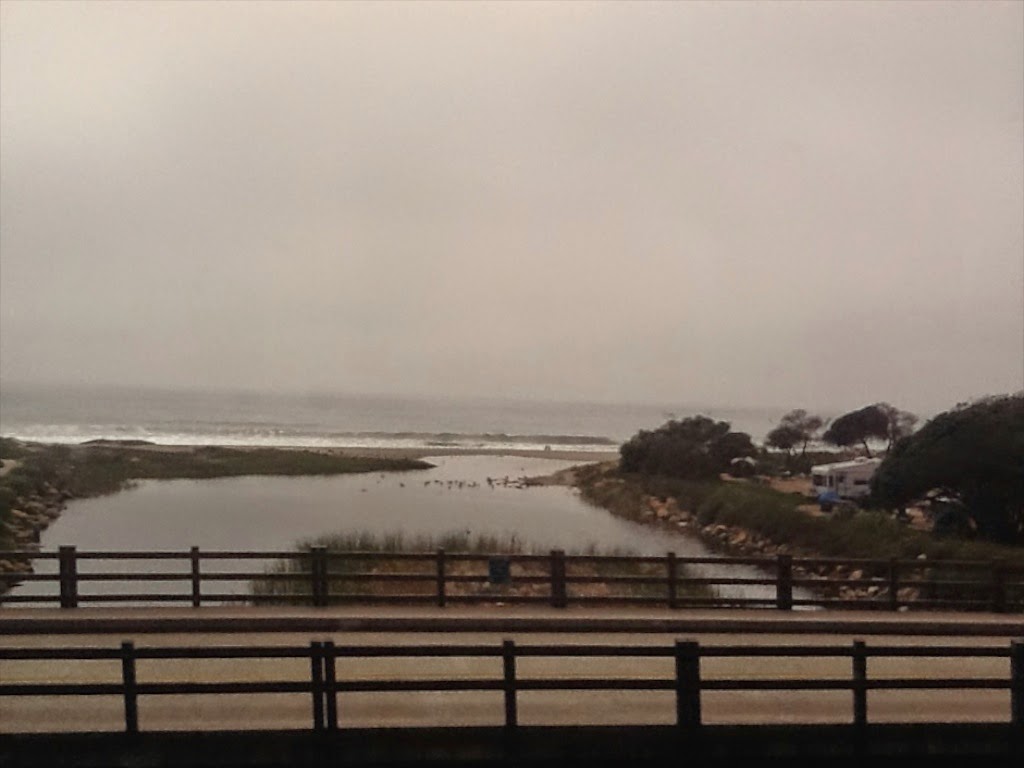 Posted by Mae Travels at 12:07 PM 2 comments: Links to this post

Posted by Mae Travels at 6:49 PM No comments: Links to this post

Posted by Mae Travels at 5:44 PM No comments: Links to this post

We have now been in Santa Barbara for a week, and I've posted several food-themed posts over at maefood.blogspot.com. We've been doing lots of birdwatching, eating well, and enjoying the beautiful mountains, lakes, beaches, and the town.

Posted by Mae Travels at 11:15 PM 3 comments: Links to this post 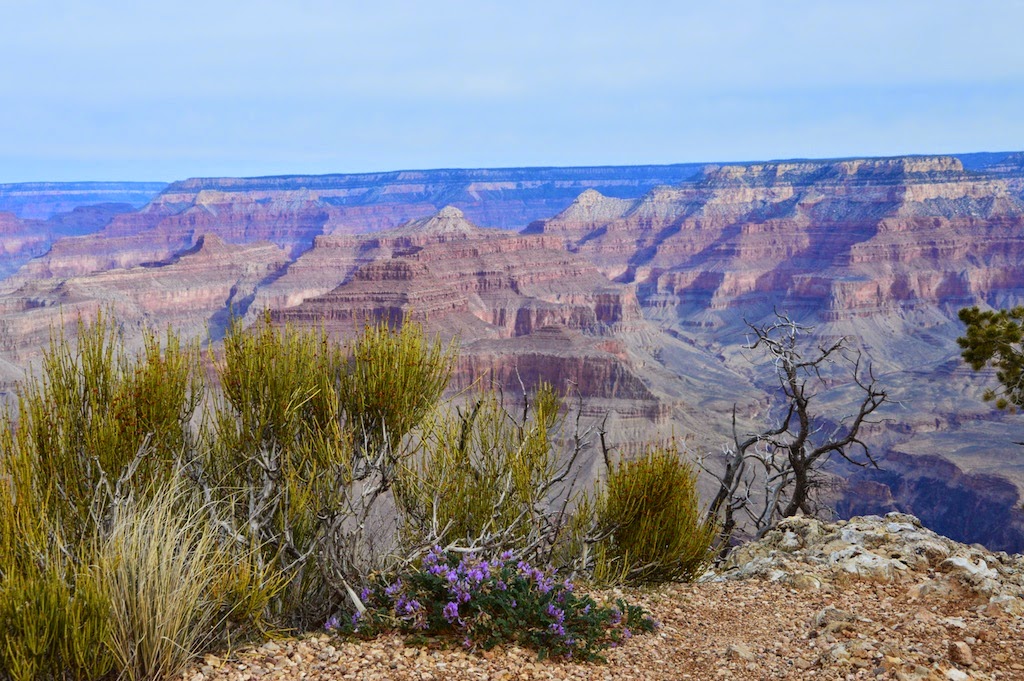 Our main activity during our one full day at Grand Canyon National Park last Friday was enjoying the views of the canyon, using the shuttle bus to get to the rim trail for a series of hikes. Then in the late afternoon, we listened to the park ranger's scheduled presentation about the California condor. A small number of condors have successfully been introduced into the park – they were once native here, but became extinct in Arizona in the 1920s. The park presents a very large, protected, and appropriate habitat for these huge birds.

The canyon’s 70 condors, which fly as far as Zion National Park and beyond, are descendants of the 22 condors that survived in California in the 1980s. These were taken into protective custody and encouraged to breed in several zoo programs. Currently, we learned from our ranger, a total of 420 condors survive. Besides those re-introduced into the wild in Arizona and California, a majority remain in zoos and sanctuaries.

The ranger talk included several suggestions about helping maintain and improve the survival of the condor. Lead poisoning from bullets in the carcasses or discarded entrails of hunted deer and other animals presents a continuing danger to carrion-eating species. Encouraging hunters to use copper bullets instead of lead is one of the principal ways to protect the released birds and help them once again become truly wild.

Unfortunately for us, it wasn’t warm enough during our stay for the Grand Canyon condors to come out of their caves and show themselves to us tourists. Len and I saw one of the Grand Canyon introduced condors a couple of years ago at the North Rim. And many years ago we saw two of the last truly wild members of this still-endangered species.

Posted by Mae Travels at 10:04 AM 3 comments: Links to this post 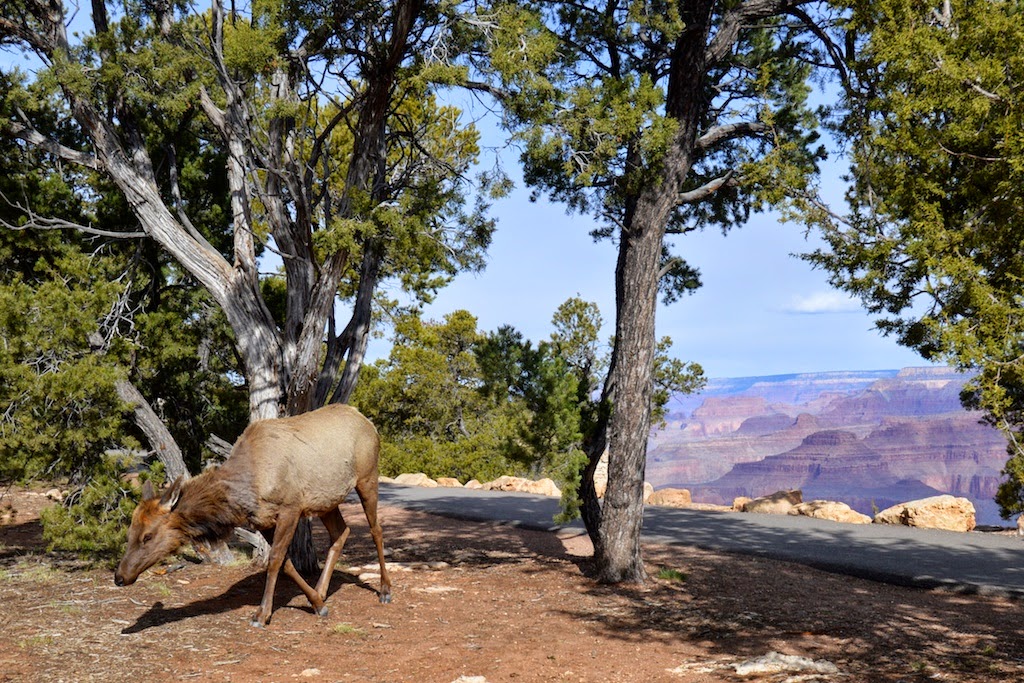 Posted by Mae Travels at 12:11 PM 2 comments: Links to this post