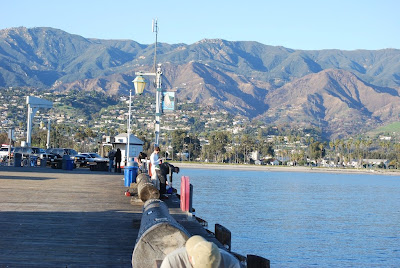 From Stearn's Wharf in Santa Barbara we enjoyed the beautiful views of the city and the water, including the Channel Islands, the sail boats, and the oil rigs out in the bay. Len took these three photos at the wharf Thursday afternoon. 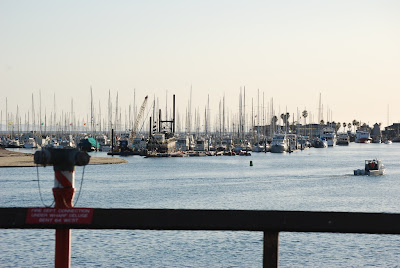 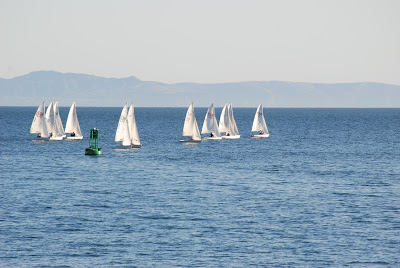 At Summerland, a few miles down the coast, we walked along the beach on Saturday with our cousin Bill. Again we could see the oil rigs, behind the horses that people were riding along the wet sand (they appear as little black spots on the horizon). Summerland is a charming little town with a cafe, a wine cellar -- we tasted -- we bought some -- and interesting galleries of American primitive art and Oriental art. 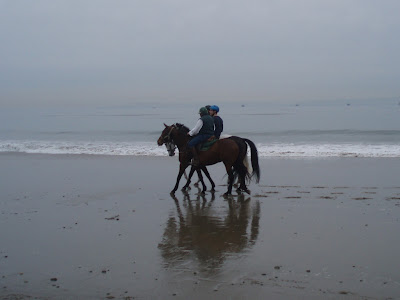 Posted by Mae Travels at 7:11 PM No comments: Links to this post 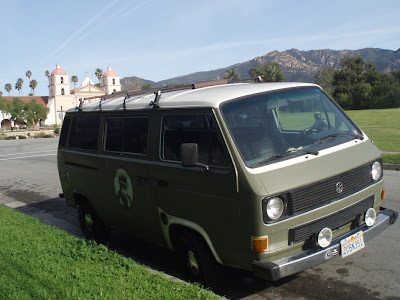 California is full of wonderful old cars like these two VW buses -- note the Santa Barbara Mission in the background. I've seen lots more of them -- also an 80s vintage Mercury Sable station wagon like the one we drove for around 10 years, ancient BMWs, and many others. 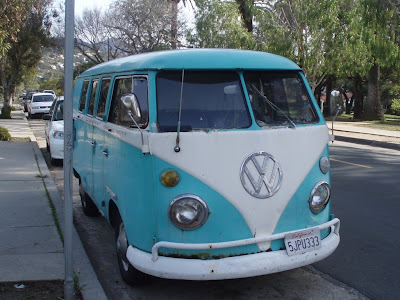 Posted by Mae Travels at 9:26 PM No comments: Links to this post

Everyone should be paying attention to the political/fiscal catastrophe now unfolding in California. Years of neglect, followed by economic disaster — and with all reasonable responses blocked by a fanatical, irrational minority.

This could be America next.

But here in San Diego, it's a beautiful sunny day punctuated by little showers. I'm sure the ocean looks gorgeous, and I'll go down and check soon. It's hard to see the bad side of things.
Posted by Mae Travels at 2:11 PM No comments: Links to this post 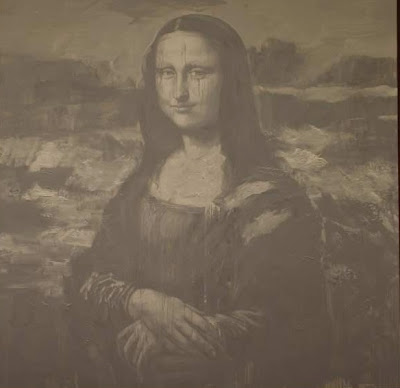 From NPR: "One of the most famous residents of the Louvre museum has a new roommate. Leonardo da Vinci's 'Mona Lisa' will share her space with a work by contemporary artist Yan Pei-Ming. His painting of the Mona Lisa is all gray and adds tears to the mysterious smile. It's titled 'The Funeral of Mona Lisa.'"
Posted by Mae Travels at 12:51 PM No comments: Links to this post

In Promised Land: Thirteen Books that Changed America, author Jay Parini made a selection that shows what he thinks are the key issues of American history. The choice of books and his discussion of them is very interesting, though he actually makes only a minimal effort in demonstrating that they were the most influential works of their day

Representing the colonial period and early American republic, he chooses William Bradford's Plymouth Plantation, Benjamin Franklin's Autobiography, the multi-authored Federalist Papers, the Lewis and Clark Journals, and Thoreau's Walden. Thus he covers the Puritan viewpoint, Franklin's creation of the self-made, self-reliant, multi-tasking American, the spirit of exploration (with the concomitant view of Indians as part of the landscape), the emergence of democratic theory, and the ideal of the pristine woods. I think these choices show what he thinks the early American experience was all about: though I'm not convinced by his claims, I enjoyed his coverage, and his summaries are very enlightening. (I've read only the Franklin.)

Parini often speaks of his own reaction to the works -- it's a very personal book. For one thing, he repeatedly says that women were absent from the conversation -- I suspect that his choices make it seem true. For example, of the Federalist Papers he says "it is almost as if women did not exist at this time." (p. 35) Blacks, Jews, and other minorites receive similar treatment as he discusses these books. Is this due to his choice of material? I don't know, but I think he likes it that way.

As the chronological list proceeds through the 19th and early 20th century, works about slavery, race, and otherness dominate his selection -- he claims that these issues emerged at that time, thanks in part to these books. Uncle Tom's Cabin, Adventures of Huckleberry Finn, and The Souls of Black Folk are the next on the list, followed by Mary Antin's memoir of her immigrant experience in The Promised Land. He claims to choose works for their influence, not their greatness as literature -- but works very hard to justify the literary quality of Harriet Beecher Stowe's work and also discusses Twain in this light. While his summary of content of the first set of books helped to support his claim of their influence, the plot summary of fiction works seems somewhat distracting, as if he dropped the focus on influence a bit.

The last set of choices, which he claims are the most influential works of the 20th century, becomes a bit eccentric. He spends quite a bit of time explaining how his next choice influenced his own personal development. Dale Carnegie's How to Win Friends and Influence People thus seems a more personal than general selection. Dr. Spock's Baby and Child Care was indisputibly influential, but it's odd that it's his route to discussing the issues of the 1960s -- combined with Keroac's On the Road. I found his background material on Baby and Child Care to be very well worth reading. I found his discussion of beats, radicals, protestors, and hippies -- in context of both books -- rather incomprehending.

Parini ends with The Feminine Mystique -- presumably to atone for his omission of women's social role from the rest of his work (Harriet Beecher Stowe and Mary Antin were women, but that's incidental to the issues). His discussion of the book really looks backwards more than it looks forwards, meaning that it's not clear how he thinks its influential-ness worked out, I guess. I had already been a bit suspicious of his views of women and their ability to contribute to society. This didn't improve my assessment of him.

And one concludes that no important book has been published, in his view, since 1963. That's really interesting!

At the end, he provides a list of 100 books that were almost as influential. I wonder if TV shows and movies would be worth considering if you really want to know what shapes our modern culture. Example: he ends with Al Gore's An Inconvenient Truth. Was it the book or the movie that played a real role in changing attitudes?

Evelyn bought me this book after hearing an interview with the author on NPR. She was totally right that I would enjoy it and challenge its conclusions. Whatever you say, just the idea of a list of influential books makes me start thinking about a lot of interesting questions that I don't know enough to answer. I'll have more to say later at maefood.blogspot.com!
Posted by Mae Travels at 11:35 AM No comments: Links to this post 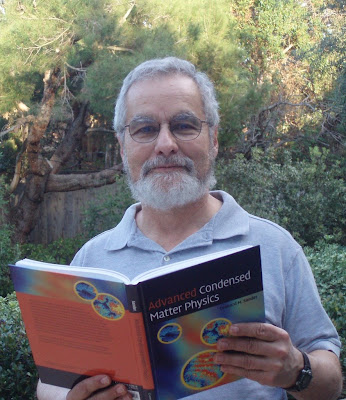