Why did the turkeys cross the road? These two wild turkeys were trailing a huge flock that crossed in front of us on Huron River Drive last Thursday.
Posted by Mae Travels at 11:53 AM 1 comment: Links to this post

The excesses of minimalism

Can something minimal go to extremes? Yes, I read today:

"One London restaurant with a splendidly minimalist men’s room discovered, by unfortunate trial and error, that customers found it difficult to 'read' what was what and, in an urgent retro-fit, it had to label its thrillingly discreet features with helpful instructions:' WC', 'tap', 'basin'. It is said that the late Joseph Ettedgui ... wrapped in white paper every book in his library. They looked beautiful, but were impossible to identify."

The article, "DOES MINIMALISM MATTER?" by Stephen Bayley makes the case that minimalism -- which may have started as early as the 18th century -- is a movement whose popularity peaked and is now being replaced by something else -- maybe chaos.

A minimalist illustration from the article:

Mona Lisa at the Fitness Center 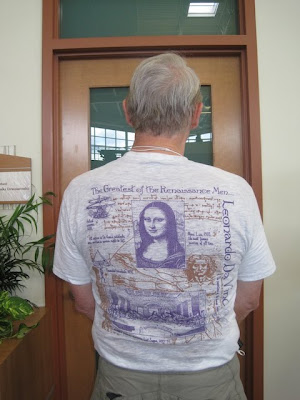 When I saw Mona Lisa on his shirt, I asked this perfect stranger if I could take a picture.
Posted by Mae Travels at 12:30 PM 2 comments: Links to this post 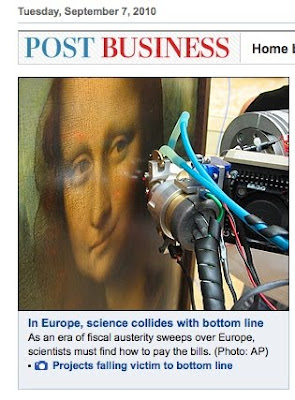 Today's Washington Post has an article titled "In Europe, science collides with the bottom line," with the front-page summary as shown at right.

Would you expect the article to focus on some sort of analysis of Mona Lisa? Of course not. The article is almost entirely about funding the research into "questions of the universe, working to re-create the cosmic soup served up by the Big Bang." Funding is in jeopardy at CERN, concerning particle accelerators, the Large Hadron Collider, and elsewhere a telescope on a mountaintop in Chile and other technology.

Oh yes, one little mention of "X-ray fluorescence [used] to illuminate the genius of Leonardo da Vinci's brush strokes and to study the skulls of ancient hominids" -- not even necessarily the Mona Lisa.

BUT what gets people's attention? That mysterious smile. Even when the main topic is money for particle research and exploring the Big Bang.
Posted by Mae Travels at 2:54 PM No comments: Links to this post

Mona at the Torpedo Factory

We found an artist making Mona Lisa collages at a beautiful art space in the old torpedo factory. No joking, they used to manufacture torpedos for military use there. It's a wonderful place like an art fair with studios -- and photos on the walls of what it was like as a manufacturing plant. I think manufacturing can be beautiful, and always loved Rouge Tool & Die when I worked at Ford; I wonder if it will ever become an artists paradise. 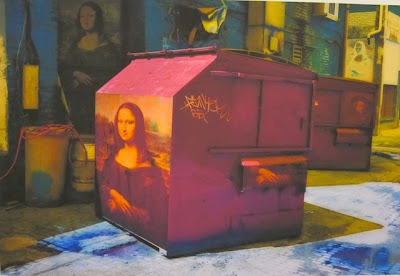 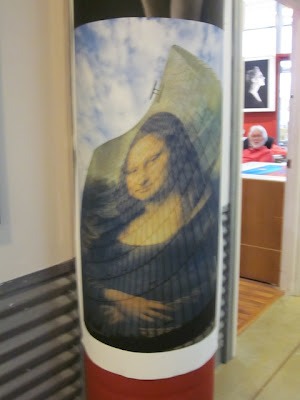 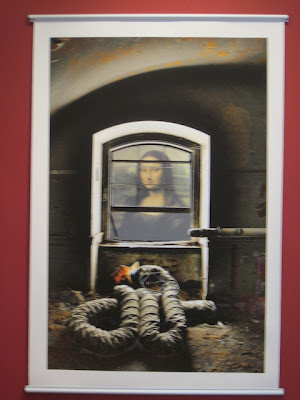 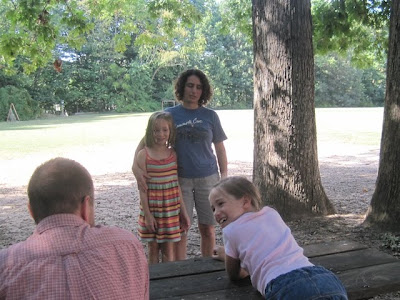 Saturday afternoon at the Oakview Playground Alice and Miriam were playing a game with acorns and playing on the slides and climbing equipment. Yesterday we drove home via a new route, highway 68 across Maryland and West Virginia, a beautiful and mountainous highway. 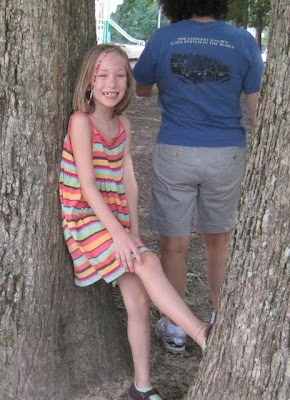 Alice calls these two the "pair trees."
Posted by Mae Travels at 1:10 PM No comments: Links to this post Alice can do some amazing yoga poses! For more about our trip to Fairfax see "The School Open House" and "Aragog" on my story blog. Posted by Mae Travels at 9:21 AM No comments: Links to this post