The World's Most Beautiful Car Wash? The air here in Santa Barbara, surprisingly, deposits a fair amount of dirt on the car, so I took it to a car wash that advertises that it doesn't use machines, only very soft brushes and lots of TLC. They begin by vacuuming the car, scrub with the brushes, and proceed through a tunnel of high-pressure water hoses and vacuum-drying. While you wait, there are several beautifully landscaped seating areas with trellises of flowers and shade. In one corner, there's even a fountain. Our whale watching cruise in the Santa Barbara channel today was unfortunately a bit windy, but the skillful captain did find one beautiful whale. It was repeatedly coming up, diving, and blowing out its blow-hole. We were sometimes close enough to hear the snort as the cloud of vapor rose up from the waves. We also saw some dolphins, sea lions, and many birds. The wind served to keep the fog or clouds away that sometimes make conditions a bit gloomy in Santa Barbara, so the harbor looked lovely and we had good views of the Channel Islands as we approached them. Posted by Mae Travels at 10:02 PM No comments: Links to this post

"Funes the Memorious" is Borges' story of a simple village man whose "perception and memory were perfect." Funes remembered every visual and bodily detail of every experience in every day he had lived, and learned languages with great ease. However, "he was not very good at thinking," wrote the story's narrator. His remarkable powers had appeared after a crippling accident which knocked him unconscious -- an event that often changes a person's mental abilities.

Before the accident Funes had possessed only one unusual capability: always knowing what time it was. Confined to bed after the accident, and choosing to spend much of his time in the dark, Funes was in the process of inventing numbering and classification schemes to allow him to deal with his overwhelming memories and perceptions. He borrows a book in Latin from the narrator and teaches himself to read it -- by chance it includes Pliny's chapter on memory prodigies, which Funes says "he is amazed that such cases were thought to be amazing."

Joshua Foer's book "Moonwalking with Einstein" which I wrote about last week describes a variety of memory specialists who have much in common with Funes, and for this reason I found Borges' descriptions especially interesting. Funes seems to me to illustrate very well the limits of having a fantastic memory, as well as reflecting some of the actual realities of people with unusual gifts like Funes' original ability to know what time it is. Funes seems to be an exaggerated -- or magically real -- example of what used to be called an idiot savant. Clearly, the story is more than a clinical description. It includes a characterized (and perhaps not entirely reliable) narrator, a setting in late-19th-century Uruguay, and descriptive details that are very enjoyable.

Foer says of this story: "Perhaps, as Borges concludes in his story, it is forgetting, not remembering, that is the essence of what makes us human. To make sense of the world, we must filter it. 'To think,' Borges writes, 'is to forget.'" (Moonwalking, p. 37)
Posted by Mae Travels at 11:29 AM No comments: Links to this post 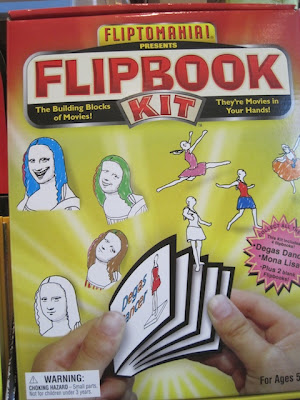 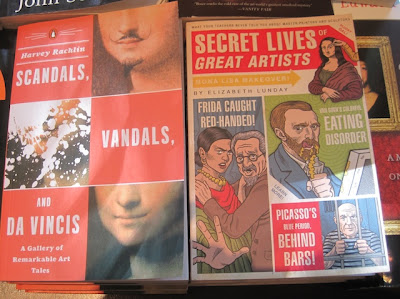 From the Norton Simon Gift Shop.
Posted by Mae Travels at 11:31 AM 1 comment: Links to this post 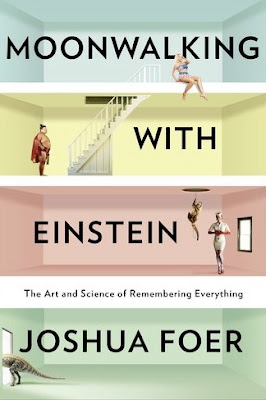 First, Foer includes many interviews with eccentric people. He describes and interviews several amnesiacs and idiot savants who can remember vast amounts of stuff naturally. He also presents a few flamboyant memory experts who are eccentric or maybe phony con-men.

Second, he describes the relevant neuroscience -- here, how memory works in the brain. His explanations are really useful and intriguing.

Third, Foer relates his personal experiences -- how he learned the ancient "art of memory" by working with other memory champions and thus won the 2006 USA Memory Championship. In particular he describes what was going through his mind as he memorized a deck of cards -- including envisioning moonwalking with Einstein to fix one card in memory.

I enjoyed reading all of this, and learned a lot. However, I'm not really inspired to try developing my own technique for Memory Championship types of tasks such as learning strings of digits or the order of cards in a shuffled deck. Some years ago I read Frances Yeats' book The Art of Memory, so I was aware of the ancient trick of using a familiar house or other building as repository -- Memory Palace -- for things that should be memorized. I was impressed by the way that modern enthusiasts have re-adapted this technique.

Foer acknowledges that there are many aspects of memory that he didn't work on or fully understand, and that the routine memories that people often worry about -- like where one put one's car keys -- aren't improved by the Memory Palace approach or even by some of the other methods he hints at. As a result I have questions that I'd like to know after reading the book:
Evelyn gave me Moonwalking for Mother's Day -- on my Kindle. Great gift!!
Posted by Mae Travels at 9:50 AM 5 comments: Links to this post At Arroyo Burro beach today, Len tried out his new camera on bird photos. The hawk above was particularly cooperative. Posted by Mae Travels at 11:42 PM No comments: Links to this post 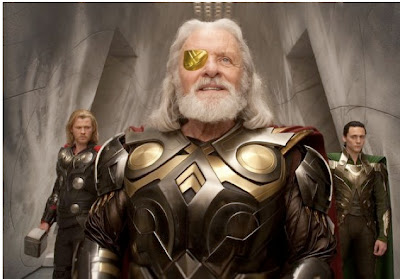 I quietly laughed a lot while watching "Thor" last night. Campy. Cliched. Anthony Hopkins the brave old god Odin trying to prepare his successor for appropriate response to the ancient enemy Frost Giants. Loki the shifty-eyed trickster. Thor the trigger-happy hunk. Asgard the unreal citadel of gods guarded by one who understands all the problems the gods have. Earth the undesirable place to go into exile with one's radioactive magic hammer. (The look of Asgard reminded me of the furutistic Jade Mountain resort that we visited in December.) Natalie Portman the dedicated scientist losing her commitment to rationality on two levels in response to the superpowers and super body of the god who came out of the sky. Wait. What?

Was there any pop movie that didn't echo someplace in "Thor"? Natalie Portman's woman scientist learning about alien beings (Norse gods in this case) was named "Foster" no doubt in honor of Jodie Foster's role in "Contact." Thor and the fire-spitting frost giant walk dramatically towards each other down the main street of the little town out West -- I was waiting for the clock hands moving towards High Noon. Men in black represent the government's interest in the impact crater where Thor just landed. Even the city of Asgard somewhere outside of reality reminded me of the town in the Gene Autry Western/sci fi "The Phantom Empire" though I'm sure many other sci fi films have used similar combinations of ultra-modern architecture to create an other-worldly atmosphere.

The serious critics have serious problems with this movie. Too bad for them.
Posted by Mae Travels at 1:20 PM 3 comments: Links to this post 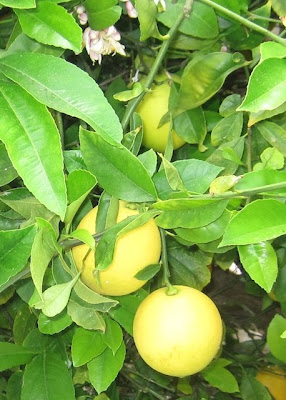 Our temporary house in Santa Barbara includes a beautiful meyer lemon tree with the biggest, juciest meyer lemons I have ever seen. I love the taste of meyer lemons. I have already put the juice into a couple of salads and a sauteed pork dish, and will surely continue to cook with them throughout our stay. 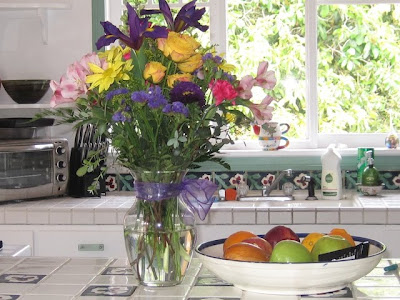 Posted by Mae Travels at 4:55 PM No comments: Links to this post

Near the Yoga studio I've signed up for yoga classes in Santa Barbara. The studio is near Alice Keck park, one of the little places that makes the town so stunning. The park is only one city block square, but has little streams, marshes, lily ponds, flower beds, secluded stone paths and amazing picturesque though tiny vistas. Also lots of benches and places for kids to play. The park across the street has large grassy areas and a band shell. Posted by Mae Travels at 1:53 PM No comments: Links to this post 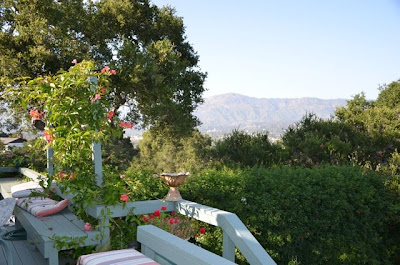 From Len's new camera: a photo of one of the decks/seating areas surrounding our beautiful home for this month. Flowers are everywhere, along with mountain views and a glimpse of the Santa Barbara harbor.
Posted by Mae Travels at 12:12 PM No comments: Links to this post I'm happy to see that the last bird-of-paradise flowers are still in bloom here in Santa Barbara. The weather is stunning: very warm and sunny with clear views out to sea and up towards the mountains inland. We are slowly taking possession of our rented home as the owners are flying out tonight. It's very beautiful with both sea and mountain views -- to be documented in time.

I dropped Len off at the University and immediately paid a visit to Arroyo Burro Beach, which I have always loved. The Channel Islands are very clear on the horizon, and I'm not the only photographer: On the Road Again

Western Arizona from Flagstaff to Kingman is spectacularly beautiful. Pine forested mountainsides at first; then we saw desert vegetation as we steeply descend to the Mojave desert. In the distance, we often saw enormously long trains carrying hundreds of containers; some said "China" in big letters. Below: you can almost see the train making it across the open spaces: