The car is dirty from all that salt

It's been a terrible winter in Michigan. Though the car was washed earlier this week, it's covered with salty splatters again. In a week we are driving back to Santa Barbara. Not such great timing, you might say, since we just suffered through winter and will miss early spring in our own yard, but that's ok with me. I'm really looking forward to the drive out, and all the California fun -- including the world's most beautiful car wash (which I've written about here several times). Some repeat photos just because I'm thinking about it ...

Posted by Mae Travels at 8:23 AM 4 comments: Links to this post


Yesterday, I read an article about people who like to watch shipping containers, "Container Spotting," at Edible Geography, a rather strange blog I read occasionally. The article described the challenge of "container spotting" -- that is, identification of containers, where they might have come from, where they might be going, and what their contents might be. Evidently there are two types of spotters: "those who track container ships, and those who track the containers themselves on port and on land."

The blog post described a new book about to be written for those who love this pastime. Though I like looking at the containers on ships or in port, I never even wondered about identification. I guess I'm not going to participate in the Kickstarter campaign for the book -- it's already oversubscribed anyway. But it made me wonder just a little about what was in the containers we saw in Seattle and Panama.

The article also mentioned two other books on containers, Ninety Percent of Everything: Inside Shipping, the Invisible Industry That Puts Clothes on Your Back, Gas in Your Car, and Food on Your Plate by Rose George, and The Box: How the Shipping Container Made the World Smaller and the World Economy Bigger by Marc Levinson. I've already read The Box, which is a wonderful history of shipping containers and the labor issues that accompanied their takeover of worldwide shipping. Maybe I'll read the other book some time.
Posted by Mae Travels at 8:31 AM No comments: Links to this post

Our last bus stop on the way to the airport: a souvenir stand alongside the road, with vast quantities of wood carvings, weavings, pottery, and everyday tchotchkes.

I'm always fascinated by Leonardo parodies like the one above which featured prominently in the souvenir stand. The ewer and towel in the foreground are not present in the original, shown at right. The Central-American embroidery on the tablecloth is more prominent than the faint embroidery in the original. Most interesting: the length of the table is very condensed here, compared to the original, and the dramatic vanishing point effect is completely lost.

I bought a very nice woven bag for carrying miscellaneous stuff, and instantly used it as an extra carry-on bag for the plane trip home. I only collect Mona Lisa items, so I didn't buy the Last Supper, just took the photo. And I didn't buy the "Mae" license plate either.

This was also the first place where we had free wireless internet since leaving Miami a week earlier: a record for no-internet living.
Posted by Mae Travels at 7:00 AM No comments: Links to this post

When you think of a tropical retreat, maybe you picture a quiet beach hotel to which you bring one suitcase of books and one suitcase of clothes. A friend of mine mentioned that she was planning this sort of trip next month to Saint Martin in the Caribbean. A hammock on the beach, someone to bring you a drink... that's a vacation.

Nothing could be more different than our visit to Costa Rica and Panama. For us: no time to lie down! Each day we had two or three activities on foot or by boat: identifying birds or trees, scanning for monkeys or iguanas, and learning new things about digital SLR settings and framing images effectively. In fact, the rainbow hammock above was pointed out by one of the two photo professionals on our trip. While the ship was moving, we listened to lectures or workshop sessions about photography or learned from the naturalists aboard about the history and background of our visits. One evening, we watched a Nova special about the Panama Canal. No hammocks for us, except as photo subjects.
Posted by Mae Travels at 7:42 AM No comments: Links to this post 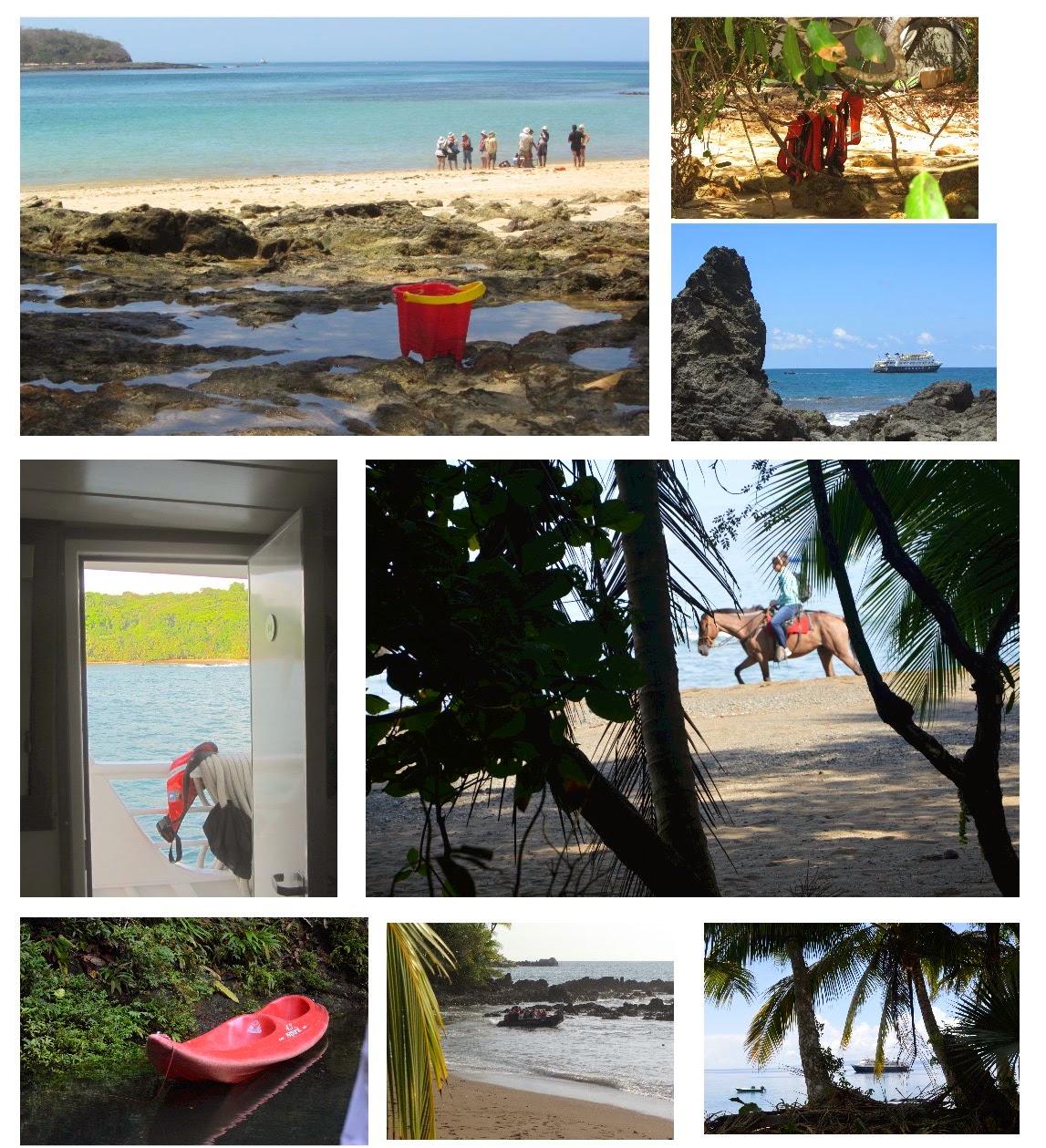 Every day of our trip in Panama and Costa Rica included a visit to a beautiful beach. The photos above show a selection of beaches, including the one with optional horseback riding, which we didn't do.

A tiny island called Granito de Oro in Coiba Island National Park was one of the most impressive. It's so tiny that it's dreamlike. 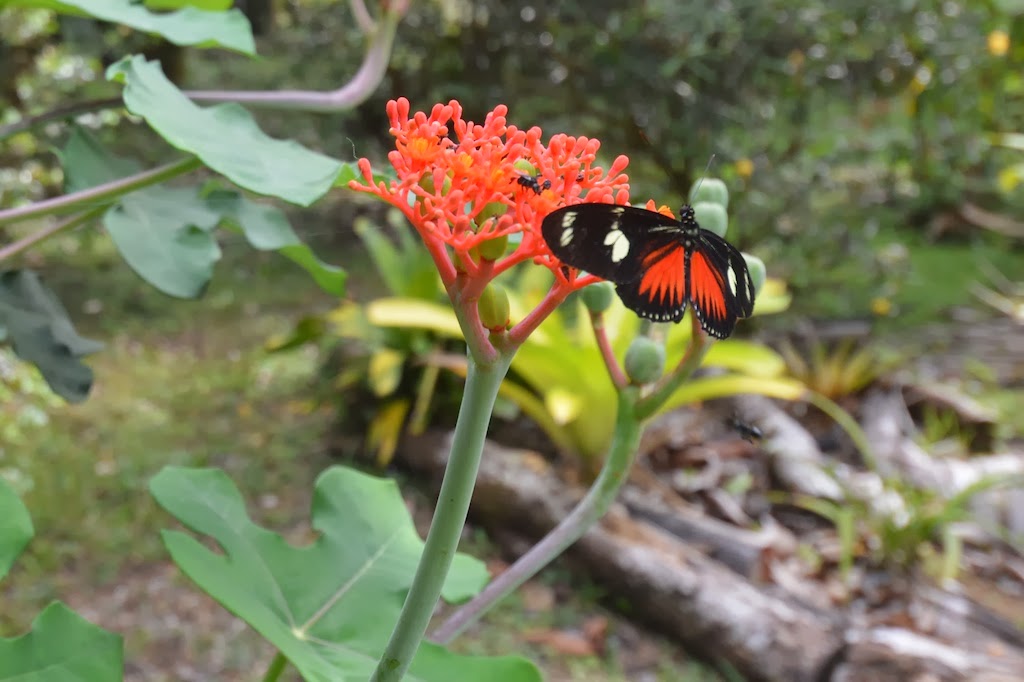 Posted by Mae Travels at 9:56 AM No comments: Links to this post


Our trip through the Panama Canal was beautiful. The first night of our trip -- March 1 -- we went through the first set of locks, on the Caribbean (or north) side of the isthmus. Our ship, the Lindblad-National Geographic Sea Lion, was towed by tractor-like "mules" that were designed and built for the canal originally during the construction process, that is around 100 years ago.

We spent the night and the next morning in Gatun Lake, the large artificial lake on the Chagras River. The huge rains of the surrounding rainforest fill the lake and provide the water needed to work all the locks. After a tour of Barra Colorado Island in Gatun Lake, we proceeded through the Culebra Cut, the major engineering achievement of the original designers of the canal.

A modern bridge spans this deep canal, just before the Pacific locks, which step the boat back down to the level of the Pacific Ocean. By dusk, we were sailing around Panama City and towards the Pearl Islands in the Gulf of Panama for our next day's activities.

Hello, World! We're back from our trip.