Poison ivy in my neighborhood

I walked around noting where poison ivy had insinuated itself into beds of myrtle, English ivy, and even under beautiful blossoms. (Update: about the flowers, Evelyn says: it just doesn't look quite right to be poison ivy. The leaves seem too ornate. She's probably right.)

Of course I found one or two plants in my own garden: the last photo shows what I did next. 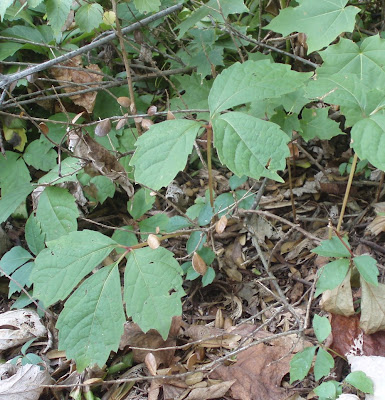 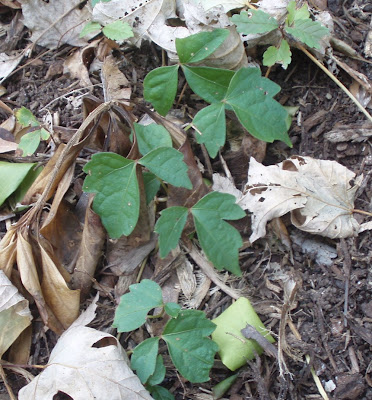 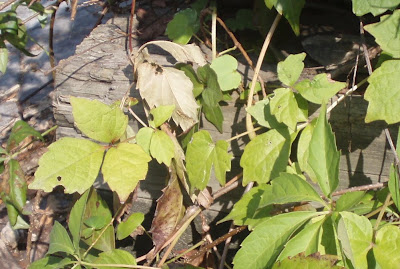 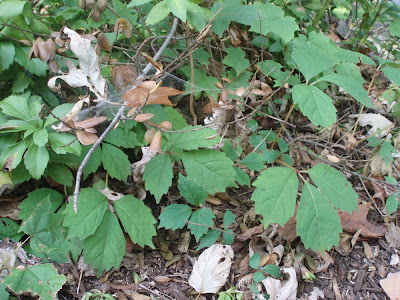 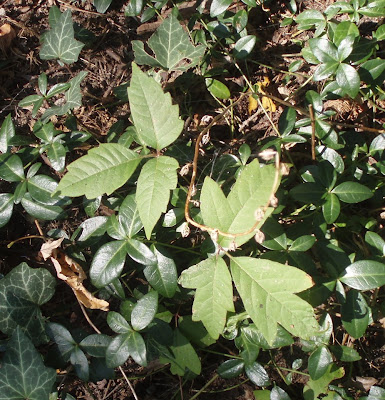 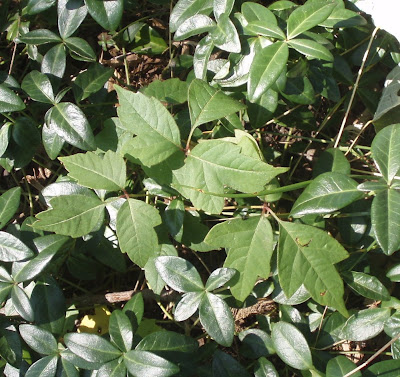 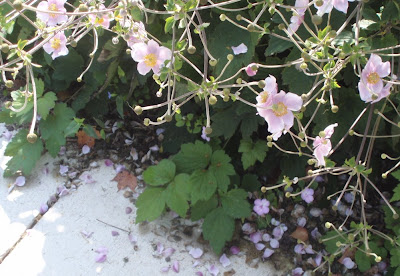 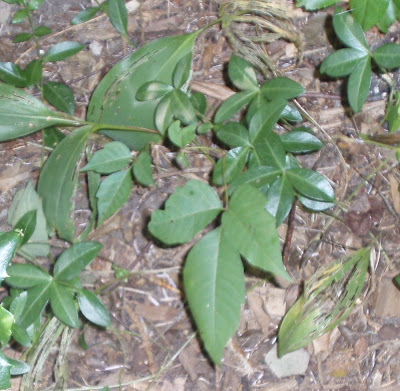 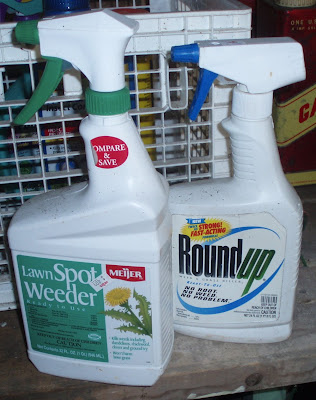 Posted by Mae Travels at 12:02 PM No comments: Links to this post

Sometimes people ask us what poison ivy looks like. Three leaves and a red stem: 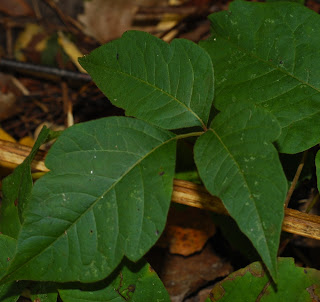 And other tales of our autumn walk this morning... 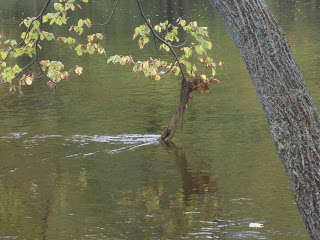 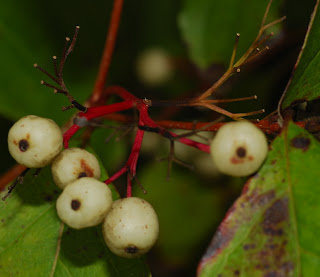 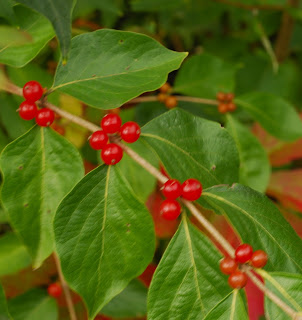 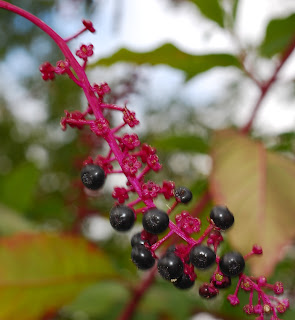 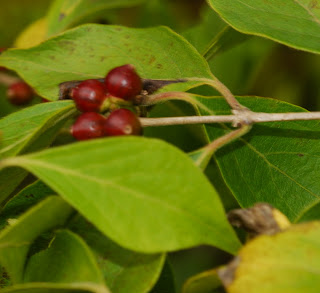 Posted by Mae Travels at 2:45 PM No comments: Links to this post 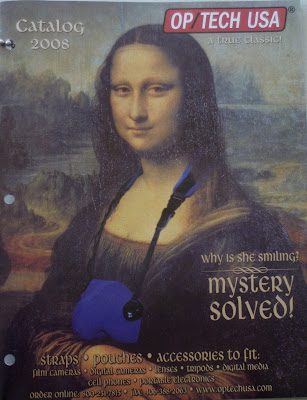 I haven't found a new Mona Lisa lately -- until this one. It's another example of something I was pursuing: if you are out of ideas, put Mona Lisa ANYWHERE. Then in your text, use a cliche like Why is she smiling? Presto! You have an instant ad. Originality? Who cares? 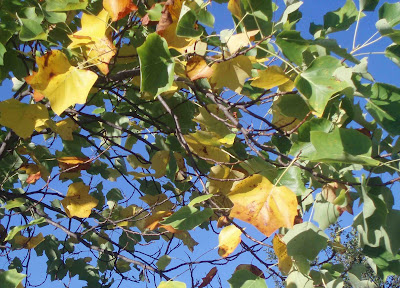 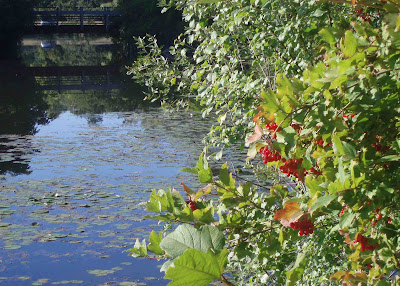 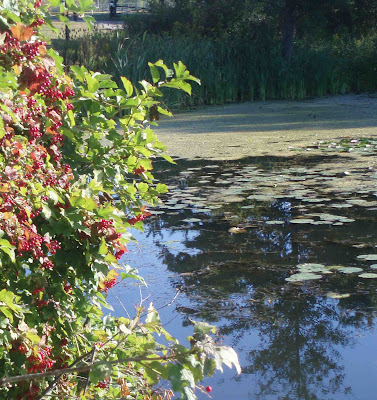 Every autumn I take some photos of the early changing colors at Gallup Park. At the Ann Arbor Farmers Market, they say that the fruit is around 2 weeks later than usual: I think the leaves and other plants are also delayed this year. But still, a few red berries, a few yellow leaves...
Posted by Mae Travels at 7:49 PM No comments: Links to this post

Waiting for this Film


The images suggest that this will be another wonderful not-for-kids-only film. I hope someone subtitles this trailer soon.
Posted by Mae Travels at 10:10 AM No comments: Links to this post 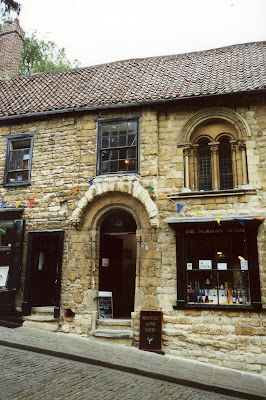 I read today that Lincoln, England, is holding an event to coincide with "European Days of Jewish Culture." The Europe-wide commemorative events involve towns and cities with a tradition of Jewish history. In Lincoln, "a formalised Jewish heritage trail has been established ready for the event, which will be walked as a complete entity for the first time," according to the blog News for Medievalists.

Several years ago, I spent quite a lot of time researching Aaron of Lincoln, a financial innovator who became the richest man in England. At left is my 2000 photo of the house in England called "Aaron's House" -- though evidence is weak that he lived there in actuality.

Aaron's story is most fascinating, involving the 12th century Jewish communities of Rouen, France, and London and Lincoln, England. Rouen and London were the two capitals of Henry II, Plantagenet, who ruled both Normandy and England -- inherited ultimately from his ancestor William the Conqueror. Another fascinating story.

According to the article:

Steve Griffiths, Jewish community secretary, said: "Lincoln is home to Britain's greatest collection of medieval Jewish houses which are a testimony to its importance as a centre of Jewish life in England. Jews lived here for the better part of two centuries most of the time in comparative peace and harmony which the periodic uproars and tragedies have tended to disguise."

Posted by Mae Travels at 12:06 PM No comments: Links to this post